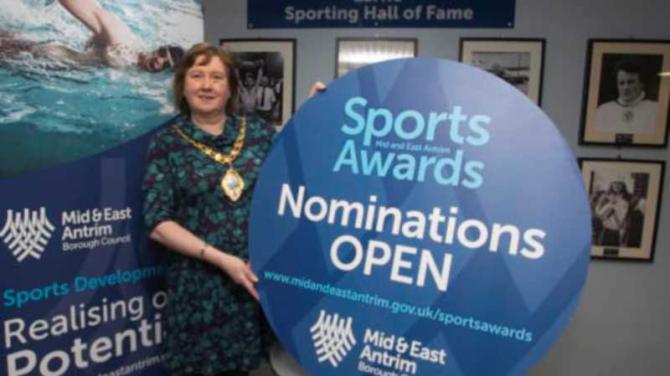 As we look ahead to a bright new year, we can also take time to reflect on the achievements of those within our community during the last 12 months and recognise the unsung heroes who ensure Mid and East Antrim has plenty to be proud of on the local, national and world sporting stages.

With categories covering every area and age group in local sport, there are opportunities to honour those athletes, players, backroom volunteers and club members who dedicate themselves day and daily to being the best they can be.

Mayor of Mid and East Antrim, Cllr Maureen Morrow, helped to launch the Sports Awards 2020 and reminded people that nominations can be made until 20th January.

“We have so much sporting talent across our borough, from the people who dedicate themselves to coaching the next generation of athletes to those who turn up every day to train and compete at the highest levels”, Cllr Morrow continued.

“I am delighted to officially launch the opening of the nominations for the Mid and East Antrim Sports Awards 2020 and look forward to celebrating the best of our sporting success at the celebration on Thursday 5th March in Larne Leisure Centre.”

The annual Sports Awards, hosted by Council and kindly sponsored by our local business community, attract top talent from throughout the borough, with last year’s Sportsperson of the Year honour going to Ireland hockey star Ayeisha McFerran from Larne after her outstanding performances at the 2018 World Cup.

One of Ulster Rugby’s biggest names, Jonathan Bell, who has 36 caps for Ireland, was also inducted into the Hall of Fame.

To make a nomination for the Mid and East Antrim Sports Awards 2020 and to find out the Terms and Conditions please go to www.