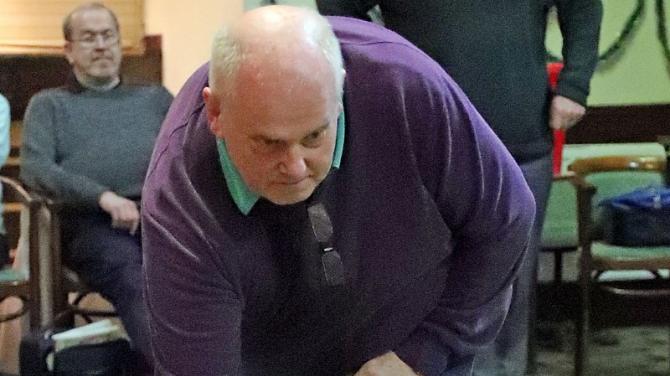 MONEYGLASS, runaway Division Two leaders in the Ballymena and District League, made their shortest away trip of the season to Randalstown, where they played Maine.

It proved to be a very satisfactory evening for the visitors as they collected a further four points from their ninth consecutive league victory of the season.

The second half points were split with Patrick Kerr securing a win for Maine with a three shot win against Brendan Marron.

Henry Marron’s 12 – 6 defeat of Brie Magill ensured the visitors of the bonus point.

There was an all Antrim ‘derby‘ at Round Tower where the hosts welcomed neighbours’ Antrim IBC.

At the break, the home side was in a very healthy position thanks to John O’Neill’s comprehensive victory over Robert McCullough.

The other game featuring the rinks skipped by Helen Totten and Andrew Matchett, gave ‘Tower’ their second point, thanks to a three shot win for the home skip.

Darren McCullough and John Logan responded with second half victories for the visitors.

Despite that, the hosts had shots to spare at the end thus enabling them to garner the bonus point.

Ballymoney Road was the setting for the basement battle between West Church and Eaton Park where the home side collected four points from a match which saw a switch in venues.

Robert Neeson just shaded a very close game against Gary Shaw by the narrowest of margins.

Both second half points were shared.

1st Ballymena entertained next door neighbours Services ‘A’ and this turned out to be closely contested match.

Roland Woods was first on the board with a 9 – 5 win against Billy Stewart. Cecil McAleese responded for Services with a final end single against Robert Mark which gave him his point.

The match between Services ‘B’ and visitors All Saints resulted in a 39 shots each stalemate!

Ann Bacon and Eugene McReynolds rinks played out a 10 all draw which meant that both sides had to split the bonus point.