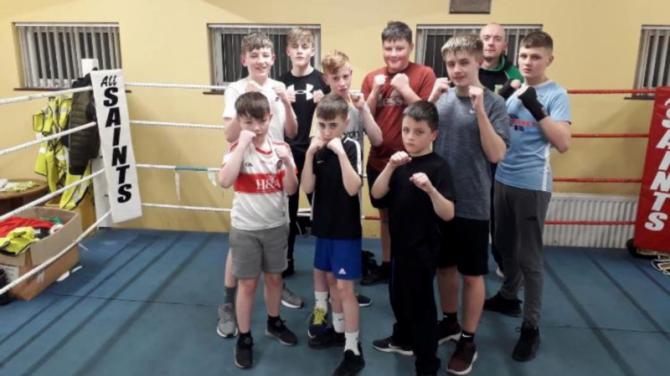 THREE lads from All Saints have won gold in the County Antrim 6s tournament.

They are Kevin McAllister, from Ahoghill, Pearse McLean, from Dunloy, and Adam Tweed, from Ballykeel.

The rest of the lads lost out at the semi final stage of the competition but all did very well indeed for their first tournament.

The 10 lads worked really hard over the past two months in the gym and are are proud to have brought medals back to the club.

Meanwhile, last Friday at a fight night in Bangor against the Abby Boxing club, Caomhin Kennedy, from Ballymena, and Jack Hanvey, from Glengormley, fought their way to solid wins whilst Gareth Rainey, from Antrim, was pipped at the post on a split decision.

And in another invite show in Dungiven against the home side St Canices All Saints had three lads representing the club.

Charlie Cushenan, from Bellaghy, and Kaylem Corcoran picked up the wins whilst Caomhin Kennedy lost out in a close contest.

The duo were competing recently at Shantallow Community Centre Derry.

And Conan McKeown and Kaylen Concoran both lost out in the semi finial stage of the competition.

In Dublin on January. He will enter the 69kgs class. Emeka has been busy this season with internationals throughout Europe and is hoping to make an impact at the National stadium in Dublin next month