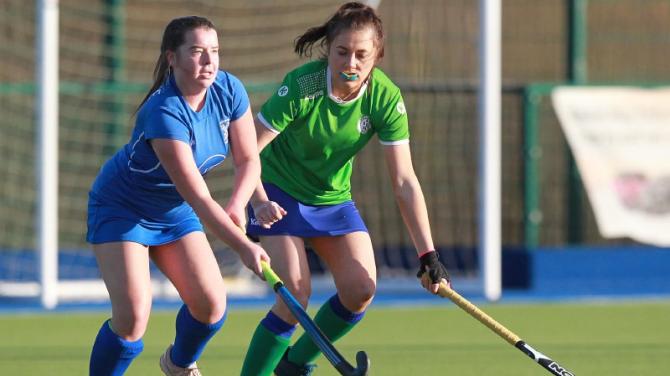 SATURDAY’S game was not a pretty one but the result shows the hard work and determination from the Ballymena Ladies 1XI squad.

However great defending all over the pitch kept the opponents from looking dangerous in the circle.

With some stern words from Coach Craig at the end of the quarter, Ballymena came into their own in the second.

Beth McFerran made a super tackle in her own half to counter attack passing the ball left and involving their forwards, a great passing movement found captain Clare Gillespie in the circle.

And she slotted it past the keeper with ease.

A second goal followed shortly after with yet again another tackle from Beth in centre midfield.

And with more passing movements this time found Aimee Logan, who scored her first.

Portadown fought back however, even with winning numerous penalty corners.

But they did not pose a big enough threat for the Ballymena defence.

This wasn’t an easy game but 3 goals and the points keeps Ballymena fighting for top spot.

Ballymena started off strong on the first quarter of the match against Portadown scoring a goal in the first few minutes of the game with Rebecca Hamilton slotting it home from the back post.

Ballymena’s second goal came from a high shot at the keeper from Jill McCrickard finding its way into the net.

Their third goal came from a strong attack from the midfield and a tap in for Rebecca Hamilton’s second goal of the game.

Ballymena continued on strong in the second quarter securing a fourth goal scored by Gillian Kennedy.

However in the third quarter Portadown came back strong but Ballymena held their defence line strong not conceding any goals.

In the final quarter Portadown continued on the offensive and managed to score two goals leaving the score at the end of the match at 4-2 to Ballymena.