Peter gets ready to test at Bishopscort 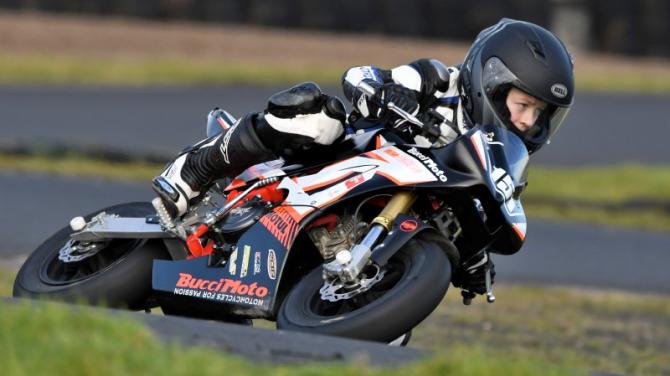 CULLYBACKEY lad Peter Willis takes a two week break - and then will be back testing at the start of December!

The 11-year-old has preparation well underway, greatly assisted by his dad, Zach, for 2020.

Peter, who raced at the weekend, has a fortnight off before heading for testing at Bishopscourt.

At the weekend his day got off to a cold start but the track was dry and in perfect condition.

From 10am there was free practice and qualifying.

The pace was super quick all morning with Peter putting himself in 2nd place on the grid.

His team mate Lewis Mullen, on the second WM Racing Bucci BR10, was in pole position.

Racing got underway after lunch. Peter, a pupil at Buick Memorial Primary School, in Culluybackey, got off to a great start taking the lead by the 2nd corner.

But it was a close battle all the way between Willis and Lewis Mullen.

Coming into the last corner Mullen got a great exit and piped Willis over the line by 0.037 seconds!

Race 2 was almost a mirror of race one. Peter didn’t get a great start this time. Running in 3rd by the 2nd corner gave him some work to do.

Willis wasn’t long getting back in the running and by the last lap was behind Mullen for the battle for 1st place.

With both riders battling it out not only for 1st in the race but for the 2nd place in the Winter series championship.

Coming up to the finish line, again Mullen got great drive out of the last corner crossing the line in 1st with Willis 0.6 seconds behind in 2nd.

Race 3 saw a little bit of rain come and the pace slowed.

Willis got off to a great start again but behind team mate Mullan.

Mullan set a really good early pace which was hard for Willis to respond to in the damp condition. He finished a strong second place.

Mullen took 1st over all with Willis 2nd over all, putting him in 3rd in the championship.

In all it was a great weekend of young Willis.

With this only being his first time racing short circuits he has show great potential for the 2020 season.

His aim going into the Winter series was to learn the tracks and the bike and he hoped to finish in the Top 5.

Coming away with 3rd in the Championship and three race wins at Mondello Park was no mean feat.

Peter would like to thank all his sponsors - WM Racing, GPS Gas, B Willis and Son Construction, Ka-boom Post Production for all there help this year and to IMC for running a successful winter series.