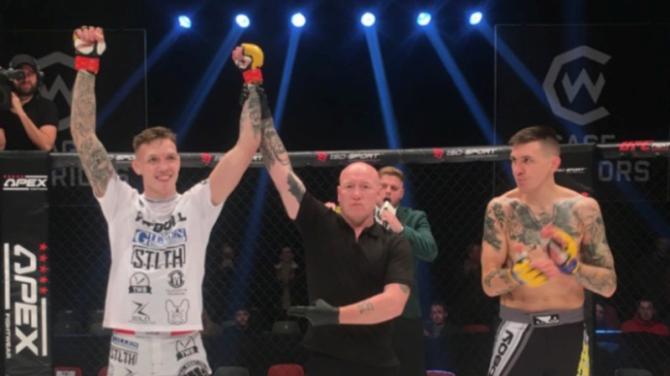 RHYS McKee will fight for World glory early next year!

The Tullygarley man was absolutely brilliant in Cork at the weekend, completing destroying his opponent just 63 seconds into the first round.

McKee was headlining the big sell-out show in The Neptune Arena - a show which was screened to over 150 million homes world wide on UFC fight pass.

And he did not let himself down.

McKee, who fights out of the New Generation Institute of Mixed Martial Arts guy in George Street in Ballymena, was just over a minute into the fight when he put opponent Hakon Foss, from Norway, on is back with a deadly jab.

And McKee seized his chance and went to work - only for the Referee to jump in quickly to save the 33-year-old from further punishment.

“ ”Rhys totally annihilated his guy in just 63 seconds of the very first round,” enthused Moore.

“This was a super huge statement made by Rhys to the whole welterweight division in the U.K. and Europe. Rhys is definitely making waves out there and has a lot of top promotions talking about him.”

Saturday night was a huge night for McKee, headlining such a big promotion in front of the UFC top brass.

“And he (McKee) didn't bat an eyelid. He was as cool as ice and took it all in his stride like a seasoned pro,” recalled Moore, who was at ring side.

Moore continued - “He's a superstar for sure and I am super, super, proud and happy for him. He's definitely the future of our sport and a great example to all our younger members at the gym of how to hold and conduct themselves. Total credit to us all and we're all so happy for him.”

McKee takes a break now until after Christmas.

Next on his fight plan is headlining a major Cage Warriors promotion in Belfast in February next year.

“On that night Rhys is going to fight for the Welterweight World title,” said Moore.

And Moore thanked all the club members and supporters from the town who travelled down to Cork to support Rhys and the club.

“It is very much appreciated as always,” he concluded.