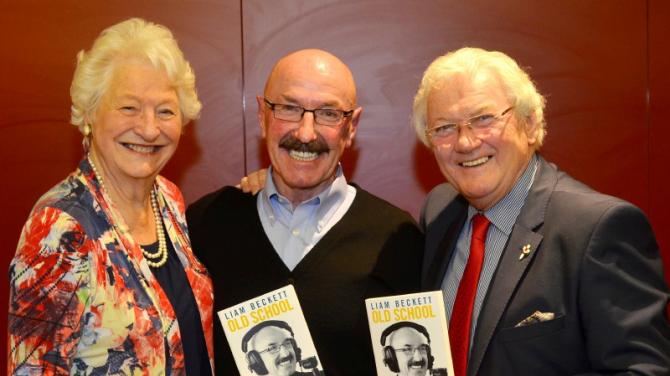 Every penny brought in from book sales will go to the very worthy cause.

Liam revealed this excellent news for Hospice at his book launch last Thursday night at Seaview on the Shore Road, Belfast.

Both Beckett and Fullerton are ex-Crusaders players.

In the book Beckett talks frankly about his life in football and road racing, paying tribute to his sporting heroes.

Straight talking Beckett says it as it is.

The book, a nice Christmas stocking filler, is a very interesting, sad on occasions, and funny read.

There is one item in which Beckett’s brother brings a football match to a stand-still, coming on to the field of play with a burger for Liam!

Part One - Bikes is Liam talking about The Road Racing Family, The anti road racing brigade, his stand out races and courses, his road racing stars and a moving article on the late William Dunlop.

Part Three & All incudes Beckett’s involvement with numerous charities and his day at Buckingham Palace to receive his MBE!

It is a good read - and I must be honest is it the first book I have ever read from start to finish at the one go.

At the book launch last week Liam spoke at length to every single guest, as books were bought and signings took place.

He thanked everyone for taking the time to attend the launch.

There were too many to name them all but Lady Mary Peters must have been top of the list.

When Liam announced that all proceeds from the book sale would be going to NI Children’s Hospice it brought big smiles from NI Hospice’s Catherine O’Hara and Elaine McBride, whose son Sam avails of the Hospice, who were both present at the launch.

“It is great news for Hospice,” said Catherine. “We cannot thank Liam enough for this very, very kind gesture.”

Beckett has a real interest in Hospice. He attended the Jingle All The Way launch earlier in the year - an annual fund raiser for Hospice, organised by the Ballymena Support Group. He told the large gathering in Tullyglass House Hotel that he intended donating some of his Black Santa funds raised in Ballymoney, to Hospice.

* At last week’s book launch Liam said a special thank you to photographer Stephen Hamilton for his input in the book and to all at Blackstaff Press, in particular his editor Patsy Horton.

He thanked Harry Gregg for providing the foreword, and everyone else who helped in any way.