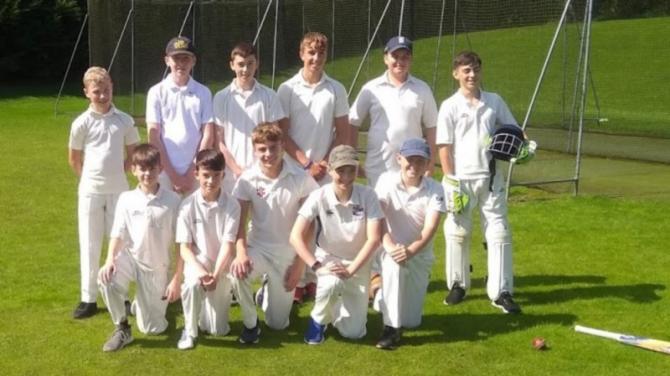 The trophy is awarded to the winners of Division 2 of the NCU u13 League.

The 18 u13 teams competing for the Queensway shield included successful clubs such as North Down, Carrickfergus and Derriaghy so victory is an excellent achievement for the Ballymena players.

The competition began with 3 league groups of 6, with the winner of each group and best placed runner up proceeding to the semi final stage. Ballymena won their group with 5 wins from 5 and then defeated CSNI c team to book their place in the final.

Their opponents were Carrickfergus. Ballymena had already played Carrick in the group stage, winning by 10 wickets. Carrick nevertheless progressed to the semis as best placed runner up and beat Cregagh u13 in their semifinal to set up a rematch with Ballymena in the final, to be played in Carrickfergus.

Whilst the earlier comfortable win gave Ballymena cause for optimism there was no sense of complacency given that Carrick had won 5 matches out of 6 to be in the final and playing a final can bring extra pressure. As it turned out Ballymena's players handled the occasion well and if the final was a lot closer than the group stage encounter it was due to Carrick raising their game rather than Ballymena underperforming.

Stevie Bristow won the toss and decided to continue with the bowl first strategy that had worked in the semis. Unusually for an u13 game this was a mid afternoon start time and the weather was very warm.

Ballymena opening bowlers Ollie Stinson and Caleb McCorriston both started well and bowled tightly. Carrickfergus' openers batted sensibly and the first wicket did not fall until the 6th over. Both Caleb and Ollie bowled 4 overs straight, with Caleb picking up 2 wickets for 9, whilst Ollie was economical and unlucky not to take a few wickets, finishing with 0 for 12 off his 4 overs.

Stevie Bristow and Luke McCorriston came on as change bowlers and in the next 8 overs Ballymena tightened the screw as few runs came off the bat and Stevie took 4 wickets for 7 runs, bowling legspin with excellent flight and variation.

Luke also bowled well, picking up a wicket, and finishing with 4 overs 1 for 12. By the 16th over Carrick were struggling at 42 for 7.

Henry Casson and Daniel Patterson bowled the final few overs and both did well with Daniel picking up 2 wickets. Carrick's number 3 Armstrong had held their innings together as wickets tumbled and he hit several good shots for 4 towards the end to boost Carrick's total to 73 when it seemed at one point they might struggle to reach 60. Still with a quick outfield, short boundaries and dry conditions 73 was a small total and it seemed likely Carrick would have to bowl Ballymena out to win the game as the run rate required was just 3.5 per over.

Ballymena's openers Stevie Bristow and Caleb McCorriston have formed a successful partnership all season and had knocked off 68 runs for no loss in the earlier Carrick match.

However the final was not to proven so easy. Caleb was bowled early on by Armstrong, who proceeded to dismiss Ollie Stinson (2) and Henry Casson (5) to leave Ballymena looking vulnerable at 18 for 3. However Stevie Bristow looked very solid, picking up sensible singles and striking the occasional boundary.

He was well supported by Campbell Napier who nudged singles effectively and kept out the good deliveries.

Gradually they swung the match back towards Ballymena. There was a further twist though as Campbell was bowled for 6 with the score on 42 and Stevie followed soon after for 24, with 20 runs still needed.

With Ballymena 56 for 5 Carrick scented a chance of victory but Calum Irvine (9no)and Tommy Chambers(3no) formed a good partnership to steady the ship.

Carrick's bowlers felt the pressure and bowled a few too many wides and Calum struck two boundaries to banish Ballymena nerves.

In the end Ballymena reached the target of 74 comfortably with 4 overs to spare to record a 5 wicket win. They were certainly tested by the loss of 3 early wickets but credit to Stevie Bristow and Ballymena's middle order of Napier, Irvine and Chambers for staying calm and wrestling the initiative back.

Extras played a role in both innings, as new regulations for u13 cricket where a wide costs 2 runs mean the extras can mount up quickly. Both sides bowled a similar number of wides (about 12 each) but the key differences between the two innings was Ballymena were more able to find the boundary which meant they were never under pressure in terms of run rate.

This was a good team effort with all 6 bowlers doing well and important batting contributions from Campbell Napier, Calum Irvine and Tommy Chambers in the middle order. The ground fielding was good and catching was very safe.

All in all a great win for the young Ballymena players. Several members of the team were also involved in an u15 cup final last week so there is a good crop of young players coming through at the club.

Thanks to all parents who helped with transport to away matches over the course of the season.