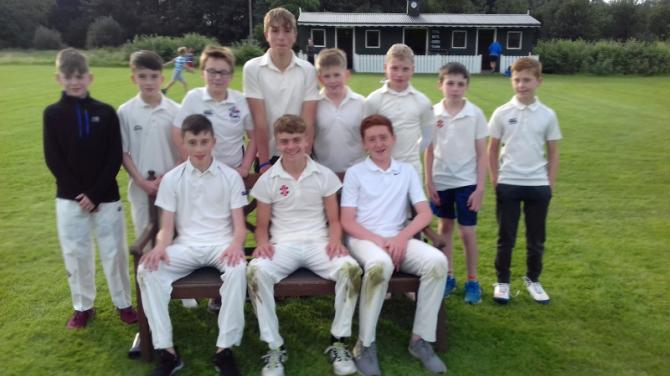 LAST Thursday Ballymena U13’s won their semi-final against CSNI ‘C’ after a good performance in a 20 over per side match.

On Thursday the Eaton Park lads will play Carrickfergus in the final.

After winning their League group with 4 wins out of 4 they progressed to the semi final stage.

Ballymena won the toss and decided to bowl first.

Ollie Stinson bowled a great opening 4 over spell, picking up 3 wickets, whilst Caleb McCorriston kept things tight at the other end.

Luke McCorriston and Stevie Bristow were introduced as change bowlers and both did a good job, with Luke picking up 2 wickets, bowling fast and straight.

After being reduced to 26 for 6, CSNI had one good partnership which pushed them over the 50 run mark.

Stevie Bristow returned for his final over to dismiss H Kokade who had been batting well.

Henry Casson did a good job bowling at the end and Caleb McCorriston came back to pick up a deserved wicket as CSNI were dismissed for 66 with 2 overs of the 20 unused.

With the run rate required just 3.5 keeping wickets intact would be key.

Stevie Bristow and Caleb McCorriston have formed a good opening partnership this season and started off well with Stevie hitting boundaries and Caleb picking up 1s and 2s.

Caleb was run out for 10 with the score on 25 after looking for a risky second run.

Stevie continued to bat confidently and find the boundary.

As he looked to push on and finish the game quickly he mistimed a shot and was caught for 20 with the score on 42.

With 25 runs needed Ollie Stinson and Henry Casson batted sensibly, knowing that run rate was not an issue.

With CSNI bowling quite well it was important not to give them any encouragement by losing more wickets.

Gradually between occasional wides and quick singles Ballymena reduced the runs needed to below 10.

Having got his team within 5 runs of a win Ollie was bowled by a good delivery for 6.

There was a slight wobble here as Campbell Napier was a bit unlucky to be caught first ball looking to cut the ball.

Still Ballymena had 5 overs to score 5 runs with 6 wickets left. Buoyed by 2 quick wickets CSNI seemed to sense that another couple of break throughs might give them a chance. However the next over Henry Casson smashed a short ball for 6 to complete the win in style with 3 and a half overs left.

Overall an excellent performance against a useful CSNI side who bowled well attempting to defend a small total.