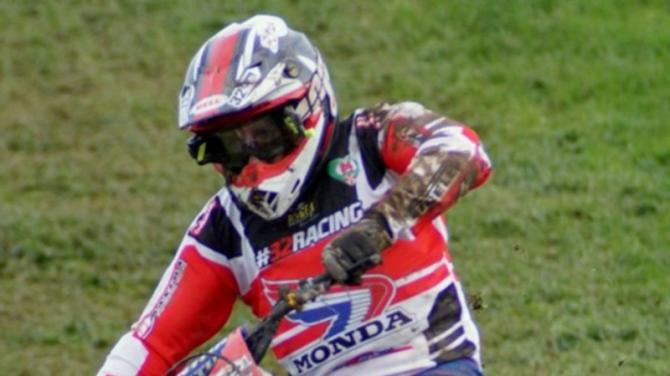 ACE veteran moto cross rider Trevor Calderwood is off to the Maico World Twinshock Championships in France later this month.

The Ahoghill rider will travel to Le Bugne in the South of France with Willie Burgess, from Comber, in County Down.

Burgess is the current British Over-50 Twinshock champion.

Calderwood, from Old Portglenone Road, knows he certainly is not in a holiday in France.

He will battle it out with some of the best veteran racers in Europe.

“I will be riding my Maico Hybrid Monda with a Honda Engine, and Willie will be on an 1981 Maico 490,” Calderwood told Guardian Sport.

At the start of the year Calderwood was named Veterans Category winner in the annual Mid and East Antrim Council Sports Awards evening which took place in Tullyglass House Hotel, in Ballymena.

At that time he told the audience he could write a book about injuries received following the sport he loves.

But they certainly did not seem to dampen his enthusiasm for the sport.

For a short time after the awards night he was off to the World event - and had other big races in store.After winning the Veterans Category he said he was delighted to he honoured in this way but added it was a bit of a surprise for him.

In 2018 he won the CZ Motocross World title in Sacramento.

He won the Trans Am 500 CZ Championship in California.

A couple of years ago he represented NI on four occasions, the last time being in the Motocross De Nationes in the Czech Republic, where the team finished third out of 15 countries.

Back in May this year Calderwood won the World Moto-Cross CZ championship crown.

On a sponsored bike he rode to victory at Maryville in California - his third World success in five years. It is an incredible achievement for a local sportsman.