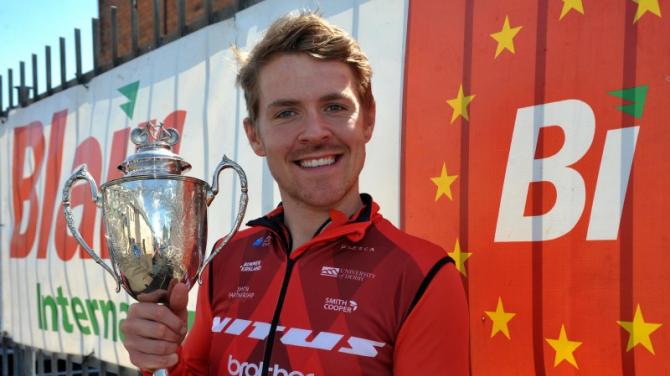 WHAT turn out of talent at the Blair International Red Hand Trophy race as Chris McGlinchey of Vitus Pro Cycling took the win hot on the heels of his great ride at the Tour de Yorkshire.

It was a solo victory at the Red Hand Trophy promoted by Ballymena Road Club.

The event was the third round of Cycling Ireland’s National Road Series, with McGlinchey taking his first victory in that series.

Team mates Conor Hennebry and Sean Hahessy had won the opening two rounds; the Des Hanlon Memorial in Carlow and Donal Crowley Memorial in Blarney. However, when a large breakaway went clear today the two fancied men from Dan Morrissey-MIG-Pactimo weren’t in it.

Their team had strong representation up front in the shape of James Curry, though he was forced to settle for a place on the podium rather than take a victory.

McGlinchey was really impressive in the Tour de Yorkshire; making the breakaway on stage 2 but also finished only two minutes down on the final stage when the racing really split to pieces.

Rather than wait today for a sprint at the finish from a breakaway, he attacked the lead group. He was initially with Adam Ward (Bio-DHL-FRS) and Craig McAuley (Caldwell Cycles).

However, McGlinchey would then press on alone and eked out a modest gap on the chasers, which reached a maximum of about 15 seconds.

Those behind continued to chase and as the finish line neared it looked like he might be caught.

However, he was up to the challenge; holding off the pursuers for his second victory of the season on home roads. Curry took 2nd place behind McGlinchey, with UK visitor Jake Gray of Ribble Pro Cycling rounding out the podium.

BRC hosted the 3rd round of the Cycling Ireland National Road Series with 27 women signing on to compete over the famous and unforgiving course of the Red Hand.

The women’s race covers exact same course at the men, see the women compete over 100km of racing.

The bunch split coming over the hills of Clough village with a leading bunch of 8 riders, including the 2 teams of BRC and Strata3-Velo Revolution. Many attacked were attempted throughout race. McCrystal was the one to make her attack stick.

Eve jumped along the coast road and stayed away. Eve had a one point 1min57sec from the chasing riders. Coming into the last remaining miles of the race the bunch had pulled Eve back to 23 sces.

However, Eve showing her class and strength finished strong and took a solo finish at the line!

With 10 mins 30 secs handicap from front to back, on a very wet evening, Maybin shook off all his scratch group comrades to ride solo through the field, overcoming his handicap.

On the final lap he rode clear and stormed to a 50 second win over the chasing peloton. Sammy Foster(BRC) took the bunch sprint for second place.

This Wednesday sees BRC hold a 42 mile TT for the Tommy Talbot cup over the Glens circuit.

Sign on at Houstons Mill with the finish on the Frys Road.