Kirsty has Europeans in her sights 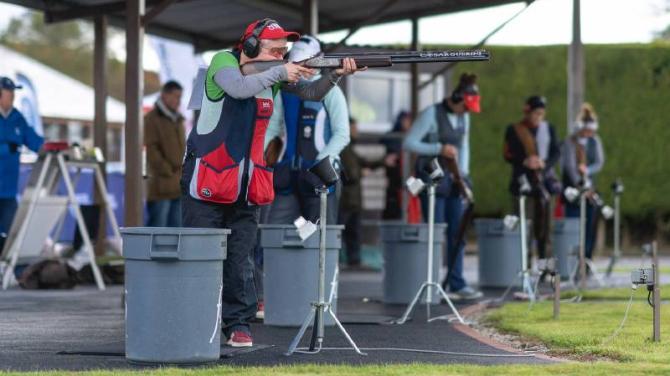 KELLS hot-shot Kirsty Barr has been selected to represent GB and Northern Ireland in next month’s European Games in Minsk.

Last week the team was announced and Kirsty is one of 93 athletes from10 sports called up.

Minsk 2019 is the second iteration of the European Games and will be held in the Belarussian capital from June 21-30.

As with the inaugural Games four years ago at Baku 2015, British female athletes will outnumber their male teammates at the Games.

Kirsty is delighted to have been selected - and hopes to bring back a medal.

She was in brilliant form as she took on some of the world’s best in Women’s Trap.

Kirsty showed true grit and determination to reach the final after a nail biting three-way shoot-off in which each had a qualification score of 120ex 125.

It was France’s Carole Cormenier who eventually won gold with a score of 44ex 50.

But that won’t matter to Barr, who was absolutely delighted to with 41ex 50 and that all important quota place.

“I don’t have the words to express how happy I am right now,” she said at the time. “I’d like to thank everyone who supports me as well as UK Sport and the National Lottery.”

Years ago Kirsty was named Senior Sports Person of the Year at the then Ballymena Borough Council’s annual awards evening.

Meanwhile, next months Games are also an important qualification step on the road to Tokyo 2020 for some sports.

Over 4,000 athletes from 50 countries will compete across 10 days in 200 different medal events with the Opening and Closing Ceremony being held in the Dinamo National Olympic Stadium.

Minsk 2019 represents the last senior multi-sport event prior to next summer’s Olympic Games and will provide invaluable experience for the British athletes hoping to travel to Tokyo.

At present, 24 athletes from three sports – equestrian, sailing and shooting – have secured quota places for Team GB at Tokyo 2020.

Kirsty is one of the successful trio.

Joining her in the Olympic Skeet will be Matthew Coward-Holley , Aaron Heading and Abbey Ling.

Ford will act as Deputy Chef de Mission at Tokyo 2020 and Hanna, who has been part of the staff for the last five Games, will also be part of the wider Tokyo 2020 team.