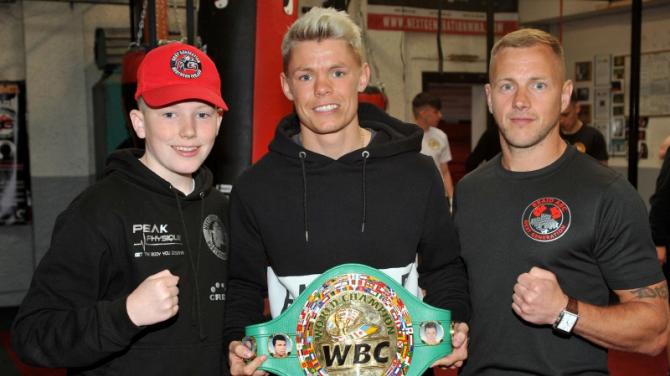 BRAID Amateur Boxing Club is back in business!

After a two-year absence they have got going again - based at the Institute of Mixed Martial Arts gym in George Street in Ballymena.

Current Braid coach Gregory Barr told Guardian Sport it is great to be back.

“It is terrific to be operational again. And it was great to see a number of new faces in the ranks,” he said.

“It is early days but I can see potential we move forward.”

Coach Barr encourages anyone interested in taking up boxing to come along to the new facilities at George Street in the town.

After the July holidays they will be running a Junior Boxing Club, each Monday and Wednesday, 6-7pm.

Braid boxers were able to get some pad work with Edwards.

On the local front coach Barr said he was great to have boxer Anthony O’Rawe onboard with the coaching at Braid.

O’Rawe has been with the club from the word go and has won two Ulster Senior titles.

He has fought over 150 amateur fights.

Anyone that knows anything about the work that is put in to a boxing club will know it takes a lot of dedication and hard work. Braid thank all who are with them in the fight to make the club a success.

Braid also said a big thank you to Rodney Moore, Head Coach at Next Generation IMMA Gym, for the facilities.