Anglers reel in £710 for NI Hospice 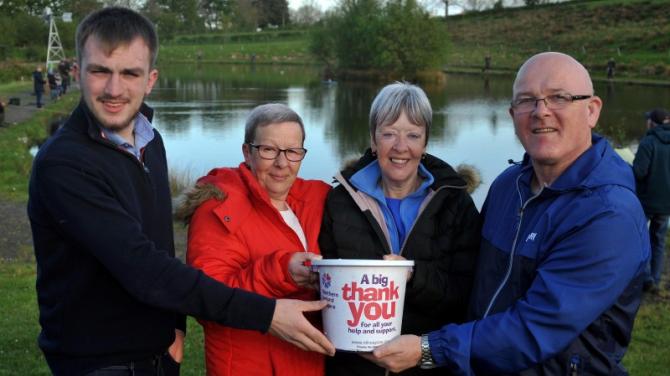 A local angling competition has landed Northern Ireland Hospice a catch of £710!

On behalf of Richard Lee Gibson (RLG Carbooters) special thanks goes to all who donated prizes and all the fishermen/women who took part.

This includes - Silverstream Fishery for the fish; John Greer for the assorted fishing tackle; David McQuillan for the box of flies; Trevor McFall for the flies; McDowell and Service Dental Laboratory Ltd.; Moes Grill Antrim and Kitchen 16 in Ahoghill for meal vouchers.

Further thanks goes to Councillor Christopher Jamieson's father John and grandfather George for access to their fishery and their generosity for the BBQ and refreshments, cooked by the two Ann's, Sharon and Simon.

It was very much appreciated on what was a cold night.

Finally a big thanks to Alan Selfridge who organised this event and whose dedication made the night a success.

“Well done to everyone who helped raise the money. My wife and I thank you all sincerely,” said Sloan Gibson, who set up the money raising RLG following the death of his son Richard. Since then RLG has raised an amazing £45,340 for NI Hospice.