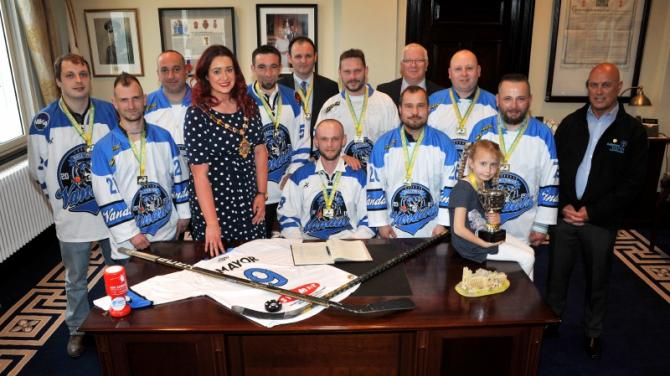 And in their first season the Under-14s finished strong showing skills and gaining valuable experience for the future.

During League 2 the Ballymena Vandals only lost one game that went into overtime.

Last week Vandals were invited to a special reception with Mid and East Antrim Mayor, Cllr. Lindsay Millar, in her Parlour at The Braid Arts Centre (Town Hall).

A spokesman said it was a great surprise and privilege to be invited in recognition of the Vandals winning League 2.

“The Mayor was very interested in hearing the ins-and -outs of inline hockey and she was very pleased when she was presented her very own Vandals jersey,” said the spokesman.

Ballymena Vandals Junior and Senior teams are looking forward to the new League year starting in October and hope that their successes will continue.

“We are always on the look out for new players, both girls and boys, from 6 years plus. Inline hockey is very much like ice hockey with a few exceptions like we have four players plus goalie on the rink as ice hockey have five and inline hockey doesn’t allow contact with other players so it’s more the skill of the player not their size,” said the spokesman.

Vandals train at the Ballymena North Centre on the Cushendall Road.