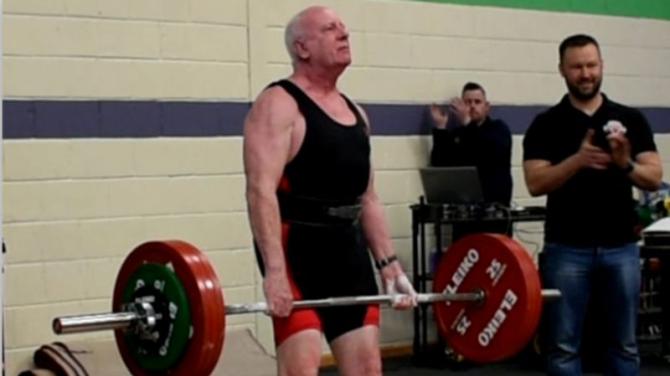 The Ballymena man, who will be 81 in May, recently won the Irish Drug Free Power-Lifting Federation (IDFPF) Championship title.

But, the senior citizen power-house was still a little unhappy at not having his achievement confirmed a WORLD title!

“Yes, I was somewhat disappointed that the quota of ‘international referees’ was not present to Judge, as the lift would also have been a World record,” Ernest told Guardian Sport.

And the power-lifter, who has featured regularly in this newspaper for his outstanding achievements, was quick to point out his National title success had nothing to do with him being on some power enhancement drug!

“Those who do not know me may be excused for thinking I must be on some enhancement drug,” explained Ernest.

“But I assure you that I am not, legal or illegal! First and foremost as a Christian I scorn any cheating.”

The Ballymena man said others who think someone of his age could not lift such a weight are also wrong!

“Those who criticise like that can hardly walk and are on so many prescription drugs that they rattle,” he said.

Ernest said he has looked after his body since he came to Christ 65 years ago.

And the former evangelist, foreign Missionary and pastor preacher said he will continue to do so until “the Lord takes me home.”

Ernest said God’s personal words to him are found in the Bible - “and as thy days, so shall thy strength be.”

“The verse of the hymn puts it like this ‘All the way my Saviour leads me, what have to ask besides, can I doubt His tender mercy, Who all through life has been my guide’,” said Ernest.

And he also recommended Definition Gym in Mill Street, Ballymena, where he trains.

“They are always very friendly and helpful. I thank them for their encouragement and support,” he concluded.