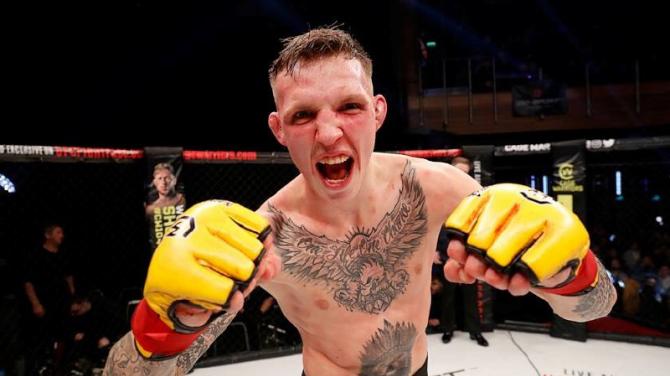 RHYS McKee made his mark in London at the weekend.

Taking on Goodwin took personal trainer McKee out of his comfort zone - but he did not flinch an inch.

“How he remained so calm and composed speaks volumes for this young man,” his head coach, Rodney Moore told Guardian Sport.

“The fight in London showed he has the heart of a lion and can finish off his opponent anywhere. I am so proud of Rhys.”

Coach Moore revealed after the scrap that McKee had quite a few niggling injuries going into the fight “Where most other people would have pulled out weeks ago, he persevered and was determined and focused to get the job done, even if we had to carry him to the arena,” quipped Moore.

Guardian Sport can revelal that it will probably be the end of June before McKee is back in MMA action.

“But this time we are going up a weight Division to the 170lb (welterweight) so we can keep our options open,” said coach Moore. “And it will also stir that Division up too and put a bit of excitement into it.”

Meanwhile, the McKee v Goodwin clash was fight of the night - and quite possibly will be Cage Warriors best fight of the year!

From the very start of the first round you could tell this fight was going to be special.

They both came out cautiously, respecting each other's skills at the start of the first round.

McKee was picking him apart with accuracy and higher volume in the shots, but Goodwin landed heavy single-shot punches and kicks that sounded good with the crowd cheering behind him it was enough to steal the round on the judges score cards.

Round 2 saw McKee take it up a gear, by this stage Perry's face was a mess from eating constant jabs, crosses and elbows from McKee’s laser like strikes and attacks, but Perry still stayed in the fight, throwing wildly as Rhys was beating him down, by this stage the blood from the two of them was all over the canvas.

In Round 3 McKee knew he needed a big finish; he came out strong again to set and keep the high octane pace and then timed a perfect opportunity to slip the punch and get a clinch/body lock on Goodwin.

Once McKee got round his hips he was way to technical and powerful for him. He maintained top position while raining down punches and elbows into an ever deflating Goodwin forcing him to scramble and forgetting about his neck.

McKee grabbed hold of it in an inverted/modified guillotine choke (known to us as the 'Skelotine') and sunk the choke in. Perry tried his best to scramble and escape but it was too late and too deep forcing Goodwin to tap out at 2 man 31 seconds! Job done.

“Can we say a massive thank you to the 60+ local supporters, local business owners and club members who all came over with us this weekend to the show,” said Moore. “And thanks to all who got the support behind Rhys and the team for this fight. It made this weekend even more special to us all. It meant the world to us all.”