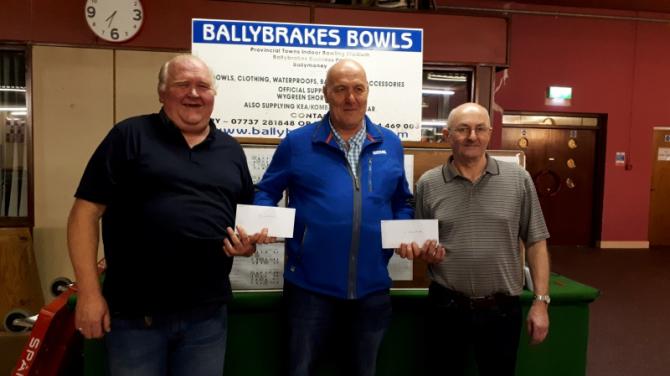 A short mat pairs bowling pairs competition in Ballymoney has raised £1,155 for the George Sloane Adult Centre in Ballymena.

Alan McComb, from Mid Antrim Zone, is the man behind the Over 55 tournament in Ballybrakes Stadium.

The pairs event donated proceeds to the George Sloane Centre.

Alan, whose son attends the centre for adults with leaning difficulties, travels all over the province and many of his bowling friends turned out to support him, with entries from as far away as Donegal, Enniskillen and South Down.

There were 66 pairs in attendance in which the first part of play was round robin basis with all pairs progressing to either the knockout stage of the main event or the plate competition.

During the afternoon there were adults from the Centre in attendance and they assisted in selling raffle tickets and helped to draw the raffle tickets.

Trevor Steele from the stadium oversaw the running of the competition and was assisted by Declan McCann, with another club member Damien McElroy keeping everyone fed and watered.

The final of the Plate competition was between M McQuillan and G McLarnon, of Eglantine, and A McFadden and S Spier, of Castledawson, - with the former pairing coming out winners.

In the main competition it was contested between Anthony Bradley and Sean Quinn, from Cookstown High School, and Uel Brewster, of Loughenreagh, and Doran Turtle, of BPFA.

It was an excellent final with Brewster and Turtle taking an early lead, but the match quickly caught up with them to go into the last end leading by one shot.

Quinn opted to play a long jack with Anthony, his lead, just playing heavy but remaining on the mat.

Uel was tight with his first bowl and with Anthony losing his second bowl Uel replied with a back toucher, that would remain.

Sean played his forehand to try to remove the bowl but missed with both bowls leaving Doran not having to play his last bowl, winning 8-6.

Everyone commented on the excellent competition and how much they enjoyed the afternoon.

Plans are in place to hold the competition again next year.

* For bowling coverage from the Ballymena and District League and the lcoal Churches League see Page 48!