Winning start for George in Dublin 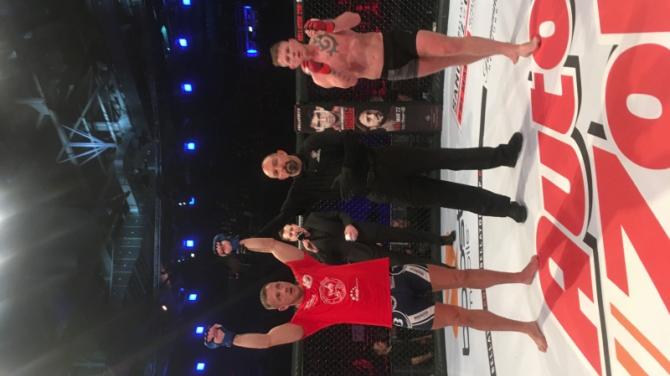 GEORGE Courtney impressed in his debut IMMA bout in Dublin at the weekend.

The George Street club member forced his opponent Ian Cleary, from Dublin, to tap-out/submit at 0:58 seconds into the third round. “It was an unbelievable performance from George, we're all so happy for him,” said head coach at the Ballymena IMMA gym, Rodney Moore.

“He puts in 110% every night in the gym and always stays in great shape. I always say to the guys ‘stay fight ready and in good shape all the time as you never know what opportunities arise’. George’s call up at just one weeks notice is a perfect example of this.”

It didn't faze 37-year-old Courtney at all taking on such a big fight - “And to perform the way he did was nothing short of amazing,” coach Moore told Guardian Sport. “I'm so happy and proud of him. To sit back all week and watch him get to experience the higher level scene like photo shoots, interviews, media obligations etc first hand was a great moment for me too.”

Courtney’s hard work and complete dedication in the gym was nicely rewarded with this unexpected fight slot.

And there is more good news for Galgorm bricklayer Courtney!

“He also impressed the Bellator officials,” said a delighted Moore.

“They have contacted me about negotiations for George to fight for them again. There's a strong possibility that they are for the Odyssey Arena in September later in the year. So it looks like more big things ahead for George and the club this year too.”

In Dublin Courtney won via guillotine choke in the third round. “It was a great back and forth fight with George using his range awareness and angle to avoid any of Cleary's attacks,” outlined coach Moore. “Every time Cleary threw anything George was out of range and countered straight back with a vicious leg or body kick. Chipping away and hurting cleary every time,” said Moore..

“Cleary couldn't figure Courtney out on the feet so went for a lot of takedowns in the second round getting George down a couple of times, but not able to hold him down, George was able to get it back to the feet and finish the round out there. Courtney started the third off with another brutal leg kick forcing cleary to panic-shoot for a takedown.