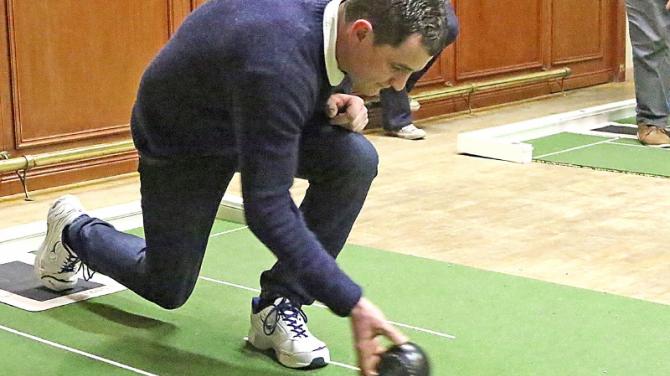 At Eaton Park the visitors ended up on the receiving end of a 28 shot defeat.

The rinks skipped by Christopher and Graham Wilson added their points as they won by two and four shots respectively.

The five point haul moves the hosts onto 46 points, 4.5 points ahead of nearest challengers, Old Bleach.

Meanwhile, Old Bleach traveled to Broughshane to play BPFA B.

At the interva they found themselves two points and seven shots in arrears.

The Bleach however mounted a second half comeback to claim both points thanks to victories for Andrew Booth and Mervyn McDonald who both registered 15 shots to secure the overall point for the away side.

The matches at Moneyglass and Portglenone were postponed due to bereavements. The league extends its sincere sympathy to the families of all concerned.

Top match of the week in Division Two was the first v second meeting of JTI and Services B at Ahoghill Community Centre on Friday night.

Leaders JTI are a tough nut to crack on their own mats and they again lived up to that reputation with a 4-1 triumph against their immediate challengers.

Timothy Rock got the hosts of to a good start with a 13 – 6 win against Ann Bacon.

Billy Millar replied for the visitors with a two shot victory against Leonard McIlroy.

Graham Maybin and Eric Smith’s rinks had a tremendous battle on mat 3 before the home skip finally recorded a single shot success.

JTI’s Mr Reliable, Billy Lynn secured his point and with it the bonus point, when he guided his rink to a nine shot win against John Sayers.

This win means that JTI have established a five point lead over Services B at the top of Division Two and the factory side now look well placed for a return to the top flight.

All Saints made the short trip along the Broughshane Road to play Eaton Park where they found the home side in top form.

Noel Crabbe and Ken Hutton put the hosts in charge at the break courtesy of victories against Eugene McReynolds and Nicholas Mitchell.

Two shots were all that separated Maine and 1st Ballymena in Randalstown where the home team emerged with 3.5 points.

Paddy Kerr was first on the board for Maine with a 10 – 5 success over Robert Mark. John Heffron and Lyle McQuitty could not be separated as their rinks ground out an eight all draw.

After the break, both sides recorded a rink win each to leave the final score 33 - 31 in favour of the hosts.

Round Tower welcomed Glenravel to their Antrim clubrooms on Monday night.

The Glens folk have been in excellent form since the mid way point of the season.

However, the hosts claimed victory on the night as the rinks skipped by Patrick Campbell, Helen Totten and John O’Kane all won.

Malcolm McKeegan secured a consolation point for the visitors with a four shot defeat of Michael Teer’s four.

(Master card not received at time of going to press).