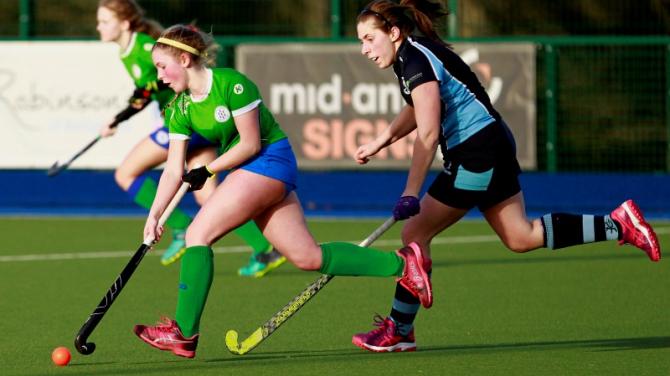 BOTH teams started well and tried to gain an early advantage.

Ballymena defended well within the opening minutes after a corner was awarded to Rainey.

Then, Ballymena conceded a goal after another Rainey corner was awarded.

Ballymena fought for every 50/50 ball.

Following this, Ballymena were awarded a corner which they did not score from.

However, Ballymena were awarded the foul.

Ballymena were one player down up until the start of the second half.

The second half showed signs of frustration and even Rainey players were shocked at some decisions made in their favour.

Ballymena performance was not up to a standard that they all know that they can play.

Many corners were awarded to Rainey and a final corner awarded was upgraded to a stroke.

Rainey failed to score from this as they hit the goal post and with 2 minutes left, Ballymena attempted one last attack and did not succeed.

Finally, the final whistle blew for which was a disappointing game all round.

Ballymena faced Dromore in the second round of the Intermediate Plate at home on Saturday.

They started the stronger team with Lyndsey McClintock opening the score line with a pass from Emma Gawley.

Soon after Rachael Whyte scored from a ball into the circle from Hollie Dickey with the second half ending 2-0.

Ballymena started the second half with two goals in quick succession from Laura Logan.

The fifth goal was struck in mid air by Emma Gawley after a deflection off the stick of Lyndsey McClintock.

Ballymena continued to look the stronger team with another goal scored by Lyndsey McClintock after a pass from Laura Logan in open play.

Ballymena were unlucky to let Dromore get the final goal of the match with the score ending 6-1 to Ballymena.

Ballymena had put five past Parkview earlier in the season, but entered this game without showing any initial signs of complacency.

Early on, the midfield worked well to create space on the right for Paul Beattie to drive forward and cross towards Ali Reilly.

The initial shot hit the post but Andy Lorimer, showing his predatory instinct, was there as expected to tap in the rebound.

Ballymena continued to press, forcing Parkview into a critical error deep in their own half, allowing Glenn Whitten and Ali Reilly to eliminate the keeper with a slick passing move resulting in Whitten’s first goal.

At 2-0 Ballymena looked very comfortable, but Parkview made subtle positional changes, forcing Ballymena into a long game rather than the short passing game that has been their trademark over the season.

This allowed Parkview more control over key areas and more circle penetrations which eventually led to their first goal, a tap in after some clever stick work at the back post.

The second half followed the same pattern, with Ballymena unable to create any rhythm, even when using the large squad available.

Whitten, however, continued to make gains, picking up the ball deep and running at the tiring Parkview back line.

Having spurned a few chances from difficult positions, he finally found space at the top of the circle and gave the ‘keeper no chance with a shot to the top corner.

Not the best performance overall, but Ballymena’s effectiveness could be measured by the frustration shown by Parkview’s forwards, who could not find that vital touch despite long periods of possession.

They were, however, gifted a second goal thanks to some fancy footwork by a Ballymena defender at the back post, but this was too little too late and Ballymena held out to take all 3 points.