Race on for sports awards nominations 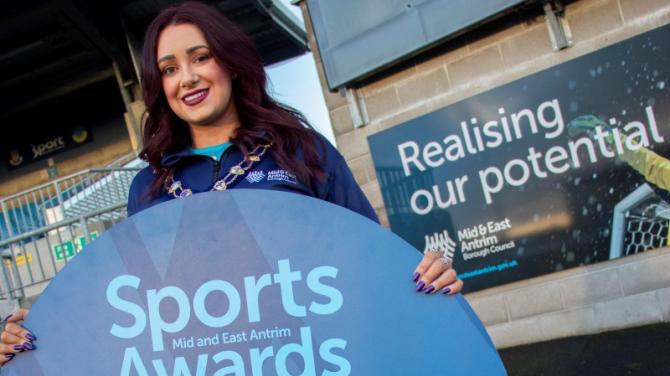 MID and East Antrim Borough Council is kick starting the New Year with a race to the top for sporting heroes across the borough.

The nominations for the fourth annual Sports Awards are now officially open for you to nominate your teams, coaches or athletes in nine categories.

“The Sports Awards are a fantastic opportunity to acknowledge and congratulate the success of our talented athletes, coaches and volunteers who deserve the recognition for all their hard work and ongoing dedication. What a year it’s been in sport for the area so I would encourage all of you to get behind your sportspeople and get nominating!”

The Mayor continued - “This year there aren’t only nine awards up for grabs, but two £500 bursaries from Balon Sportswear, for athletes in golf or athletics. We also have three new sponsors this year across the categories, so it really is shaping up to be bigger and better than any year before.

“I feel passionately about encouraging people to become involved in sport and as a council we consistently promote and develop all types of sporting and fitness activities. Building healthier communities is a key priority for council and what better way to show off the calibre of talent we have here than by celebrating our unsung sporting heroes with these awards.”

The nine categories include -

* Junior Sportsperson of the Year

* School Sporting Performance of the Year;

* Manager/Coach of the Year

* Team of the Year

* Sportsperson of the Year and

Nominations are open until noon on Monday, January 21.

For more information on individual award guidelines and criteria, or to download forms go to www.midandeastantrim.gov.uk/

Hard copies can be obtained on request.

Back on December 13 last year Guardian Sport revealed that the annual Mid and East Antrim Sports Awards evening would be taking place on Thursday, March 7, in Ballymena.

Sporting people and clubs from Ballymena, Larne and Carrickfergus have been asked to nominate in different sections - and the winners will be announced at the gala sports night.

A sporting panel will meet in Ballymena towards the end of January to sift through the nominations before selecting the winners in each of the NINE Sections.

Winners will be announced at the Awards night which is taking place in Tullyglass House Hotel in Ballymena.