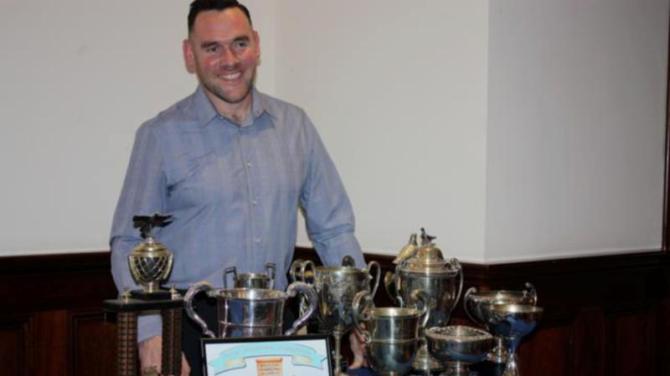 THE local Adair Arms Hotel was again the venue for the dinner and presentation of prizes for Ballymena & District HYPS on Saturday night.

A good turn-out of members and friends were made welcome by Vice-Chairman Martin Graham who said grace just before dinner was served, a choice of Turkey & Ham or Roast Beef. Following a very nice meal Secretary Willie Reynolds thanked all those present for attending the annual presentation and we send best wishes to Charlie McManus who had to pull out due to illness, get well soon Charlie. He congratulated all the season winners, Mid Antrim Combine was topped eight times, W & J Smyth and R Service & Son in the Old Birds, then in the Young Birds wins for Blair & Rankin and 2 x 1sts for J Eagleson & Sons top prize-winners for the third season on the trot. The outstanding achievement was by Martin Graham who joined the elite of the sport adding to the long list of Derby & National winners in Ballymena & District going back decades. He won the highly prized Yearling Nat, a race proposed by myself and first flown in 1978. All told he had 3 x 1sts in the Mid Antrim INFC competition, 1st & 2nd in the Kings Cup only two birds home arriving early on the second day and then 1st and only bird in the YB Grand National from Penzance.

Pay-out for the season was almost £1,000 which included specials, Johnston Eagleson & Sons who race to the Cullybackey Road just pipped Blair & Rankin in a photo finish. Martin Graham was best again in the INFC competition and he set a record which will take some beating the highlight of which was the lofts success winning the Yearling National from Sennen Cove. He had the only two birds in the Kings Cup from St Allouestre taking 1st & 2nd MAC and then in the YB Grand National from Penzance had the only bird timed and took 1st MAC. In winning the Nelson Corry Cup in the INFC Martin joins a long list of National & Derby winners in the famous Ballymena & District, many household names in the sport at the time. On top of that he wins the Harkers Cup for Best Ave Yearling Nat and his favourite Penzance Young Bird National.

INFC prizes – Martin Graham, Billy Ramsey, W & J Smyth, Blair & Rankin and George Bell. New members R Service & Son made a big impression in their first year and things could change especially in the INFC competition with Martin Graham cutting back for a year and Billy Ramsey moving house and leaving the sport.

In the major race from St Malo in France only a handful of birds were recorded and none into Ballymena, some change that from years back when the NIPA Open was topped locally. Just 6 birds in Section B and two in MAC including W & J McLean who won 1st Sect A.

The cups and trophies were presented by Sammy Steele the President of Cullybackey HPS and the Prize Cards and MAC & Sect B Diplomas by Donna Service, who also conducted the raffle.

Many thanks to all those who assisted with the prize night, James Harris, Robert Alexander, Robert Service, Bertie Blair, George Bell, Martin Graham who set up the dinner, and Valerie Eagleson who wrote up the prize cards for the fourth year, all those who brought many prizes for the raffle and the sponsors who support us each year faithfully.

Diary Dates for Ballymena & District members – NIPA Agenda mandate of Delegates on Monday 4th February, Ballymena AGM on Monday 18th February, the Fees etc. on Monday 25th February, all at 8.00pm. Resolutions for the AGM in writing please, to the Secretary before 31st January 2019, and any resignations.