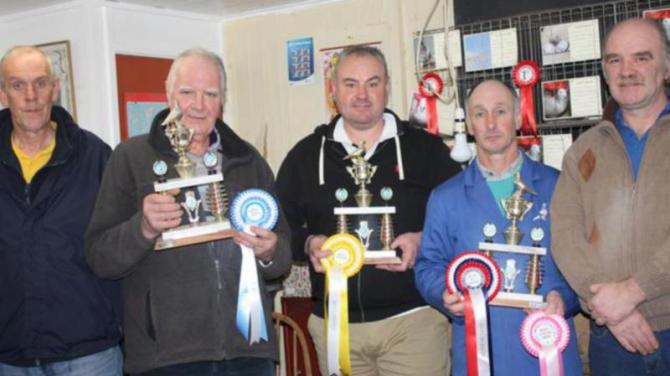 As usual it was a 3 in 1 Show with classes for Old Birds and Young Birds, judges Through Wires, Handled and Eye-sign, some 220 birds.

The judges travelled from the County Down Bernard Smyth the Secretary of Kircubbin and Gary Hawthorne and from County Londonderry John Edgar of the NI Show Racers Society who turned up at short notice to judge Eye-sign.

Our weekly show trophies went to - Club members trophy W & N Gilbert for the 5th season on the trot and Visitors trophy to Brian Herbison. Thank you to all who attended weekly, members and visitors.

Well done too everyone who took part and won prizes. It was a great class of pigeons, and thanks to the judges.

Chairperson Nicola Gilbert congratulated all the winners and thanked the sponsors including Frazer Feeds in Banbridge and all those who supplied prizes and supported the show.

Now to some rest and look forward to the racing season.

Members should also confirm numbers attending the Annual Dinner and Prize presentation in the Adair Arms Hotel on Saturday 12th January 2019 to Martin Graham or Homer.

The AGM of Kells & District HPS will be held in the local clubrooms on Thursday 21st February 2019 at 7.00pm. Any proposals to be with Secretary Mervyn Gregg before 7th February.