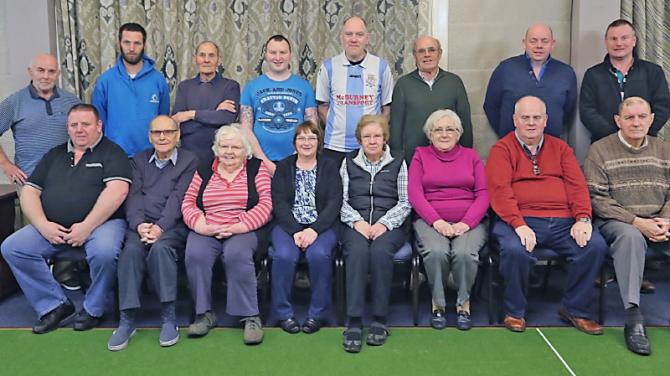 IN the Ballymena & District Indoor Bowling League the action switched to the League Cup where BPFA ‘B’ produced the shock result!

They defeated their ‘A’ team colleagues in the 3rd round.

The B team went into the match, played on their own mats, with a + 5 shot handicap although they did not require that advantage as they knocked out the cup holders by twenty shots on the night.

At the interval, the B team had increased their advantage by one further shot thanks to David Morrison’s rink, who won by four against Alan Cahoon.

Doran Turtle was the A team’s only successful skip as he guided his four to a three shot win against Nigel Graham.

The second half belonged to the B team as the rinks skipped by William Esler and Adrian Hamill played some outstanding bowls to beat David McCullough and Ivan Craig’s rinks respectively.

“ They played the better bowls on the night and fully merit their semi final place. Well done to them," he said..

Golf Seniors swept into the last four with a comprehensive home victory against All Saints.

All four host rinks won by clear cut margins as the Raceview side booked their place in the semi finals.

Division Two leaders Services B progressed to the semi final stage for the second consecutive season with an eight shots win at West Church.

Both teams had two rink wins each on the night but the visitors winning rinks skipped by Eric Smyth and Stuart Smith accumulated enough shots to ensure Services of their semi final spot.

The first League Plate match of the season provided a surprise result at Portglenone CC where Division Two Glenravel secured victory by thirteen shots, without needing their +7 handicap.

Martin O’Neill and James O’Hagan put the visitors thirteen ahead at the break.

Both second half games resulted in 17 – 2 victories, one for either side, which ensured the visitors progressed to round two.

The hosts made full use of home advantage as they progressed to the 2nd round with a comprehensive win.

1st Ballymena bowed out of the competition away to Antrim IBC.

However, they produced a spirited performance against their Division One opponents.

Closer examination of the master card revealed that two of the rink games were drawn whilst David McQuitty won his game against John Logan by three shots.

Irene McCullough’s four came up trumps for the hosts.

Their 14 – 6 defeat of Roland Woods was their only rink win although the margin of victory was sufficient to ensure Antrim’s place in the 2nd round.

The final League Cup action of the week took place at Ahoghill Community Centre where JTI welcomed Division One Michelin.

Aided by a + 6 shot handicap, the hosts contested this cup tie right to the final end of the match before succumbing to a narrow two shot defeat.