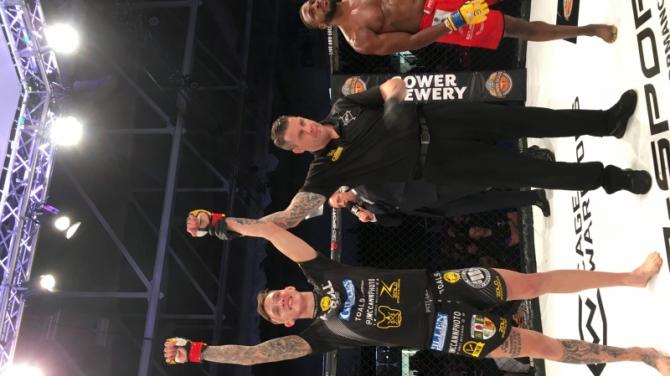 RHYS McKee has sent out a clear message - he wants to rule the Cage Warriors Lightweight Division!

And his brilliant performance in The Ice Arena in Cardiff on Saturday suggests he has what it takes to become king.

The battle had a lot at stake; both fighters were making the Cage Warriors debuts - with winner nailing a place in the Lightweight Division with the possibility of a shot at World glory.

A few years ago The Notorious, Conor McGregor, was owner of that coveted belt.

The historic event in Cardiff had a stacked fight card put together by the promotion to mark their 100th show.

“He put on a perfect, clinical and outstanding performance against a very tricky and tough opponent,” Moore told Guardian Sport.

Round one saw Jefferson trying to come out fast and start strong but McKee’s lightning fast and laser precision jab caught home every time he tried to pressure and get inside.

The game plan was to keep it at long range and a fast pace to try and frustrate Jefferson and get him to over commit.

But as soon as he felt McKee’s power, his plans quickly changed and he tried to get it to the mats and into the grappling/ wrestling range.

“He quickly realised he was lost there too as he couldn’t control Rhys or keep him down on the ground,” outlined Moore.

McKee took things up a gear and increased his work rate and volume of shots, forcing his man yet again to try and clinch up.

It was clear that George was out of his depth - and McKee raised the pace up another level, opening up with a ferocious exchange of single power punches, slipping, sliding and countering a desperately, wildly swinging depleted Jefferson.

McKee caught him with a couple of good straight shots first, then cracking him with a beautiful left hook buckling Jefferson’s legs.

An uppercut had him sliding down the fence and curling into the foetal position with McKee towering over him and raining down shots forcing the Referee to jump in and save Jefferson from the onslaught at 4 minutes 44 seconds in the first round!

The audience was in shock, nobody had ever put a beating on Jefferson George like that nor had he ever been finished in the first round!

“It really was a totally amazing and outstanding performance from Rhys,” said head coach Moore.

“I’m so happy and proud of this young man. There was a lot of pressure and hype on Rhys going into this fight. A lot of people expecting big things from him, but he kept his cool and stayed composed throughout.”

This fight was live on UFC fFght Pass and was aired in 250 million homes worldwide..... yes, 250million! and he was cool as ice and never batted an eyelid.

Coach Moore, who is last weekl’s Guardian Sport actually predicted a first round victory, said Rhys is a very special young fighter who is going to go far in this sport and take it to another level.

“He will put Ballymena and Northern Ireland back on the map again for something positive and good,” said Moore.

“He’s is a complete privilege to have around the gym and to teach in classes. His late dad would be so proud of him. He is a credit to him and his family.”