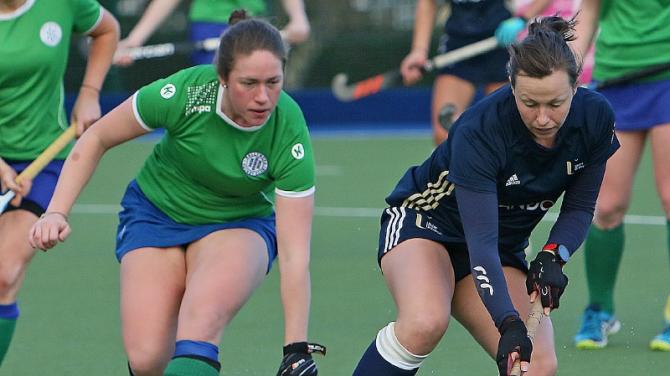 ON Saturday afternoon Ballymena came up against very strong opposition in the Ulster Shield and were hit for seven goals without reply by Ulster Elks.

The visitors started well winning a penalty corner within minutes converting from a straight strike after a rebound off the keeper.

The second goal came from quick stick work by Megan Frazer slotting the ball into the goal.

Goals three and four came from penalty corner before half time during a spell of play where Ells dominated possession throughout midfield.

Ballymena made a better start to the second half keeping possession and creating some chances upfront.

Elks however, continued to place pressure on the Ballymena defense with Joanne Logan making some excellent saves for Ballymena.

The remaining 3 goals by Elks came from converted penalty corners.

Ballymena have not progressed to the next stages of the Cup however can focus on the league for the remainder of the season.

A wet Saturday at Bangor Aurora saw Ballymena 2s take on Bangor 1s in the second round of the Intermediate Cup.

The game got off to a frantic start with play swinging from one end to the other with both teams having opportunities.

However, it was the home side that took the lead when they won a penalty corner and calmly slotted the ball into the bottom corner.

Bangor continued to retain much of the possession however the Ballymena defence remained strong and goalkeeper Samara Nicholl denied them any further goals.

Coming back from half time 1-0 down Ballymena rallied and won several penalty corners however they were unable to capitalise on these.

Bangor gained momentum and also made several attempts at goal.

With 5 minutes to go Bangor were robbed of possession on the 25 yard line before Emma Gawley skipped past the Bangor defenders and fired the ball into the net past the Bangor goalkeeper.

Both teams fought hard to the end however at the final whistle the score line was 1-1 which meant penalty runs were to be the deciding factor in the game.

Despite valiant efforts from the 10 players from both teams who stepped up to take on the challenge Bangor came out on top.

The girls are home to Rainey on Saturday in their final league game before Christmas hoping to improve upon their performance from the past two weeks.

Ballymena took an early lead from a great touch infront of goal by Emma Hunter.

There were good passages of play from Ballymena and they were putting the pressure on the Randalstown defence, forcing their keeper to come into action.

Unfortunately Randalstown equalised shortly into the 2nd half and started to tire Ballymena out.

Both teams managed to score one more goal each with a fantastic individual goal from Sarah Gage for the home side. Ballymena were unlucky not to hold onto the lead and come away with the 3 points. The girls played extremely well and it was a very entertaining game of hockey.

Ballymena took on Ballynahinch for the second time in under a week after playing them in the Cup semi final the previous Sunday.

Ballymena get off to a solid start, passing the ball around purposefully and putting pressure on the Ballynahinch defence with the midfield of Murphy and O’Neill linking well with the forward line.

Ballynahinch started to push forward and created a few opportunities and got their first goal from a short corner.

Ballymena were quick to respond with a pinpoint pass from Larmour in defence to Whitten who fired the ball past the Hinch goalkeeper to make the game 1-1.

Both teams continued to have periods of control in the match but before half time it was Ballynahinch who took their chance after playing a ball through the Ballymena defence and past McConaghie in goal making the game 2-1 at half time to the visitors.

In the second half Ballynahinch continued to build the pressure against Ballymena creating several chances which eventually led to a penalty flick that was confidently converted into the top corner.

Hinch continued to push on after this and getting their reward with another goal before the end.