Wins for Mathew and Ross 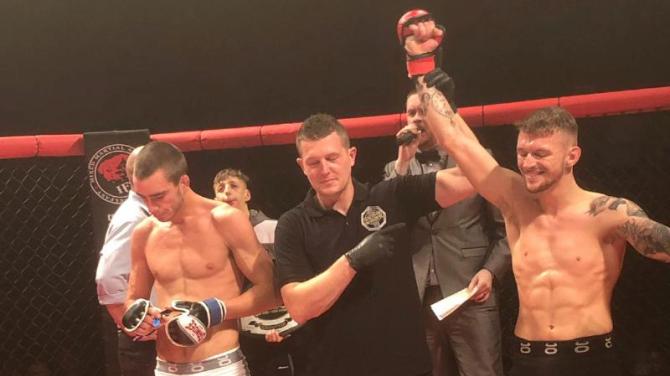 IT was a mixed bag of results at the weekend for Ballymena’s Institute of Mixed Martial Arts (IMMA) fighters!

There were two wins/finishes, a draw and a loss/no contest.

Teenager Elliott was making his fight debut at the Clan Wars 33 show in the Ulster Hall, Belfast.

He arm barred (arm locked) his opponent at 1 minute 22 seconds in the third round.

“It was a great fight and Mathew dominated from start to finish,” said head coach from the George Street club, Rodney Moore.

“His older, more experienced opponent defended very well and managed to scramble out of a few dangerous positions before eventually getting caught.”

Next out was Ross 'John-boy' McCorriston.

The 24-year-old was defending his all Ireland Amateur Bantamweight title against number one contender Ryan 'Chaos' Murphy.

McCorriston was on fire taking only taking 0.46 seconds to finish his opponent via rear choke submission.

“That was Ross's third successful defence of his title and a nice way to finish out the year,” summed up coach Moore.

It was another barn burner of a show put on by both fighters and having the crowd on the edges of their seats.

“ We thought Dillan had done enough to nip the last two rounds, but the judges scored the fight even and gave it as a draw,” said Moore.

Meanwhile, 26-year-old Gavin Kelly fought over in Colchester on the Cage Warriors 99 show, and was very unlucky.

He sustained a rib injury a few weeks back at training, dislodging/detaching his floating ribs.

“ Just as he was getting into his groove in and starting to land shot he over extended and torqued his ribs too much causing them to separate and pop out again, sending him falling to the mat in severe pain,”concluded coach Moore.

All at Ballymena IMMA wish Gavin a speedy return to the ring.