Gold honours for All Saints lads in Ulster Championships 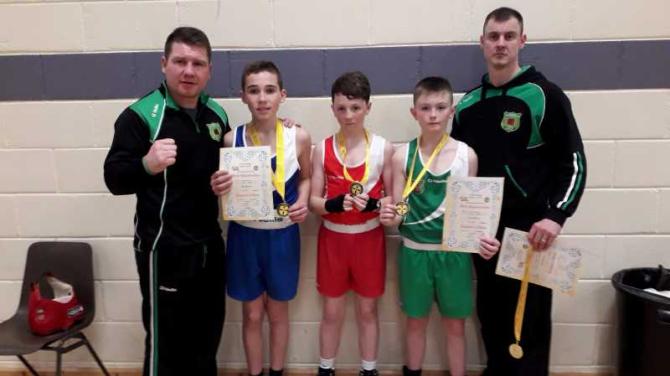 McKeown’s family is steeped in the history of All Saints.

Great Uncles Harry, Paddy and the late Gerry and Francis were members when the club first opened its doors in the early 1960’s .

Between them, along with his grandfather Tommy O’Neil and his cousin Paul in the mid 90’s, they lifted Down and Connor, Ulster, Antrim and Irish titles.

And in the final he over powered a lad from Castleblaney to win the gold medal in the 38.5kgs classl!

The Dunclug College student stopped Pat McDonagh from Armagh in the third round.

Richie is a very strong lad for 11 years of age.

Looks as though he is going be a threat to any lad in this Division this season with his natural strength.

Bellaghy lad Charlie Cushenan was very unlucky not to come away with gold.

He lost out on a split decision in his final.

He performed fantastically and looked to have done more than enough to take the title.

But it was not to be and he had to settle for silver this time round.

The Ballymena lad and grandson of another All Saints legend Martin Ward was beaten on a split decision in his semi final by the eventual gold medal winner.