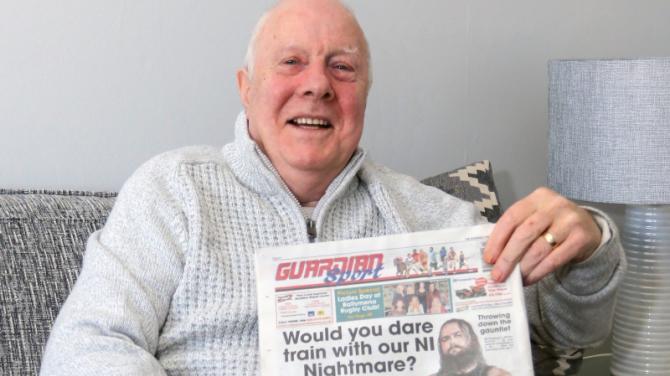 FORMER professional wrestler George Crothers said if current Ballymena wrestler Brian Norton had been on the circuit 40 years ago he would have been a “big, big star” in the ring!

George , who was known as ‘Lone Wolf’, was not too bad a performer himself in the late 70s and 80s.

And he said he read with interest the recent story about Brian Norton in the Ballymena Guardian - a story which brought his own wrestling memories flooding back.

My story about 7ft 25 stone Brian, a former Traffic Warden from the town, outlined that the Civil Servant had a body-double part in Game of Thrones!

“When I saw the photograph of Brian it made me think about Giant Haystakes who was part of our wrestling circuit team,” George, from Chichester Park in the town, told Guardian Sport.

“They looked a bit alike, with the long hair and beard, although Giant Haystakes was taller and much heavier.”

When George was wrestling he recalled being in action in the ring at the tennis courts at Ramore Head in Portrush.

“That was about 40 years ago, and we attracted a spectator turnout of up to 6,000. Wrestling was very, very big at that time,” said George.

Another popular venue for wresting was the Arcadia in Portrush.

And it was through wrestling that George met his wife, Isobel!

But their first meeting was most unromantic, with ‘Lone Wolf’ being literally thrown out over the top of the ring ropes, and ending up in Isobel’s lap!

“When the show was over the wrestlers usually mingled with some of audience, and enjoyed some chat and refreshments. I made a point of seeing if the young lady I had landed on was present, so I could check she was alright, and apologise. She was and I did and the rest is history,” smiled George.

The former Lisburn man always wanted to be a wrestler!

“I beat all in my way that day,” recalled George. “

The next I knew I being invited to a Wrestling Class in Leeds! Promoters were impressed with my showing in Dublin and after my performance in Leeds I was signed on to the circuit.”