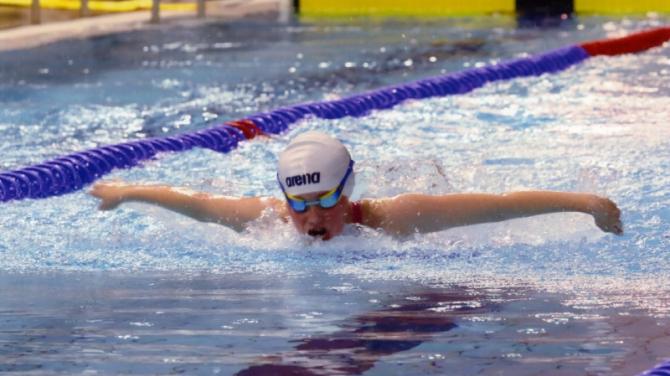 Children from across Northern Ireland in both primary and secondary schools competed over the two day weekend hoping to secure times that would take them to the National Schools’ finals in Dublin in February 2019.

She was placed in two of the faster heats and is now looking forward to the National Finals.

In the Breaststroke she smashed her previous PB by 5 seconds with a time of 45.87 and got to the final as the 3rd fastest qualifier.

She placed 4th in her heat.

In the Butterfly she took 3 seconds off her PB with 41.76 and qualified for the final as 7th fastest qualifier.

She placed 5th in her heat, her time enough to secure her place at the National Schools' finals.

In her 50m Breaststroke final Amelie false started and was disqualified.

Just five minutes later it was her 50 butterfly final; she was 7th fastest going into this final out of 10 swimmers and in such a tough event had no right to be in the medal hunt.

The young swimmer told her very proud dad Victor she had not intending leaving the complex without securing a medal for her school!

Overall she secured 3 PBs, made two finals and booked her place in next year’s Nationals.

In the freestyle she led her heat from start to finish, setting a new PB time of 46.56, coming in 10 seconds faster than the second placed competitor, and taking a massive 25 seconds off her previous PB!

This qualified her for the final, where she missed out by just one second on qualifying for the All Ireland National Schools' finals.

In the 50m Breaststroke she led from start to finish, clocking 1.01.27 and smashing her PB by 16 seconds.

This secured her place in the Irish National Schools finals in Dublin in February.

It also secured her place in the final as 6th fastest qualifier.