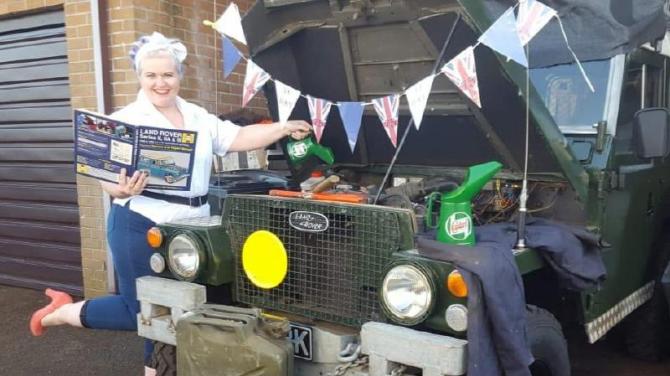 The arrival of the Corona Virus changed everyone’s big plans to celebrate VE Day which this year marked 75 years since Victory in Europe (VE) Day which saw Britain and its Allies formally accept Nazi Germany's unconditional surrender after almost six years of war.

Staff Sergeant Instructor Amanda Roxborough from Cullybackey Detachment, C Company, Army Cadet Force (ACF) was to undertake the Nation’s Toast to the Heroes of WW2 at the top of Slieve Donard but thi,s along with other cadet events, did not happen.

So the Cadets from C Company, 1st (NI) Battalion, ACF, constisting of Antrim, Ballymena, Ballyclare, Cambridge House Grammar, Cullybackey & Glengormley Detachments decided that although their previous planshad been dashed their celebration simply had to go on!

As a result some of the cadets, parents and adult Instructors came together “virtually” to have a tea party.

Everyone was asked to submit photos of how their home Tea Party celebrations would look like either in uniform, detachment T-shirt’s or period costumes.

A video was then compiled combining photos old and new, with backing music from WW2's National sweetheart Vera Lynn fittingly singing “We’ll meet again” as the cadets, due to the current “lockdown”, have not seen each in 6 weeks.

It turned out very inspirational with cadets making their own flags and bunting to some of the instructors really embracing the WW2 Theme.

The full version of this along with other church events can be seen on The Grouped Parishes Craigs Dunaghy and Killagan Facebook page. Many thanks to the Rev Adrian Halligan for inviting them to take part.

Cambridge House Grammar paid their own tribute by joining the 8am salute on the 8th May on the “Join the Salute to VE 75”.

All these virtual events can be viewed on