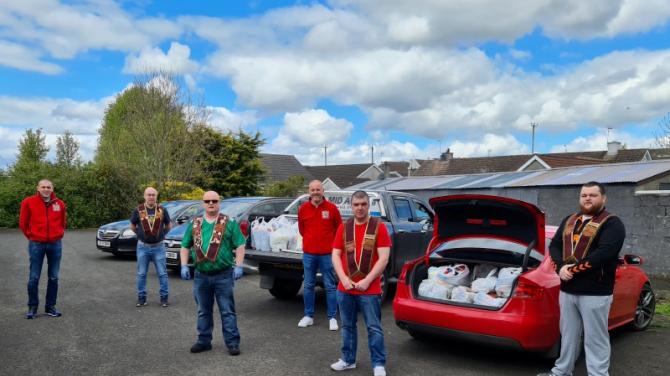 Members of Ballymena & Harryville Apprentice Boys of Derry branch club and Ahoghill Loyal Sons of William flute band have been putting their shoulders to the wheel in the middle of the current pandemic to provide an invaluable support network for members of the community.

Ballymena & Harryville ABOD club recently secured funding from Mid and East Antrim Borough Council to distribute a number of vital care packages throughout the Borough to some of the most vulnerable in our society, and they reached out to their good friends in Ahoghill Loyal Sons of William to help with distributing the packages.

"During these unprecedented times, we as a club felt it was important to keep in contact with our senior members, to make sure they all had a strong support network around them and to let them know that we as a club were still there for them despite the ongoing pandemic.

"A number of the officers and members had been checking in on them periodically since the lockdown really began, so when we learned that financial support was available from Mid and East Antrim Borough Council we got on it straight away to ensure we were able to fully support our members and the wider community surrounding the club.

"We received the funding and set about purchasing the items needed to make up essential care packages including cleaning products, toiletries, canned foods and other every day essentials.

"We also reached out to our friends in Ahoghill Loyal Sons of William Flute Band and were delighted to be able to work with them to distribute over 40 care packages to some of the most vulnerable members of our community.

"Obviously thanks must go to Mid and East Antrim Borough Council for providing the grant and for the extremely fast turnaround throughout the application process, the club would also like to thank Maurice Cooper and the Ballee Discount Shop for helping us source the products. Thanks also must go to Galgorm LOL 239 who allowed us the use of their hall to make up the packages.

"But a huge amount of thanks and credit must go to the members of the club and the band for their attitude and desire to help their community despite the ongoing situation.

"It has been extremely encouraging to see so many examples of the loyal orders and bands coming to the forefront to help their communities and it serves to prove that our Institutions and Associations are about much more than parades!"

Mervyn Stirling, Bandmaster of Ahoghill Loyal Sons of William said: "When we were first contacted by the club about the idea we agreed to it right away.

"We as a band had been trying to help our members and their families as best we could but this enabled us to take that level of support to another level. When distributing the care packages it was very apparent how grateful and appreciative people were, even just for us as a band to be thinking of them.

"It's not until you're on the ground can you fully appreciate just how isolated some people are during this period, so for us as a band to be able to help those people is fantastic.

"We'd just like to express our thanks to Ballymena and Harryville Apprentice Boys of Derry branch club for reaching out to us and giving us the opportunity to help our community.

"I think it shows perfectly what bands and loyal orders are all about, and that's helping their communities and being there for one another."