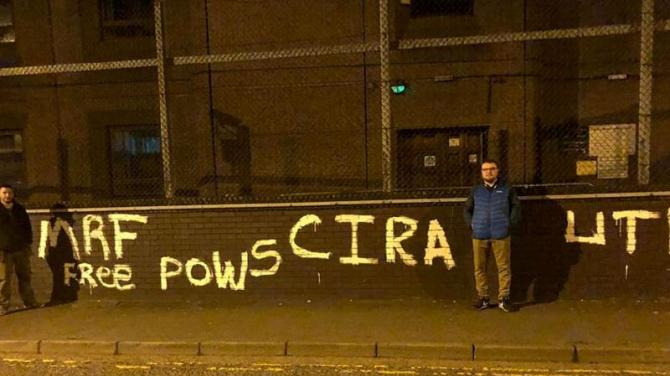 A 25-year-old man was arrested on suspicion of 25 counts of criminal damage following incidents in the vicinity of Albert Place in the town that were reported to police at 10:10pm.

Inspector Mick Wood said: "It was reported that incidents included graffiti, using white paint, that was daubed onto various properties in the area, including on Sydney Lane, High Street, Albert Place, the local Court House and premises on Lower Mill Street as well as two vehicles.

Most of the graffiti was of a sectarian nature and, so, we are treating these as sectarian hate crimes.

"The 25-year-old was subsequently arrested and he remains in custody this morning, assisting us with our enquiries.

"Our enquiries are continuing and I would appeal to anyone who has information which could assist our investigation to call us on 101, and quote reference number 1926 of 08/04/20, or alternatively call Crimestoppers on 0800 555 111."

The slogans refer to the ‘continuity IRA’ with the numeral 32 (counties).

TUV Cllr. Matthew Armstrong and his party colleague, TimothyGaston issued a joint statement after visiting the area.They said: “We are absolutely appalled by the appearance of sectarian graffiti in the Albert Place area this evening on walls, buildings, vehicles and at least one shop front.

“At a time when communities are coming together, there are obviously those with absolutely no regard for the rule of law or their neighbours.

“Militant republicans showcasing their vision of an island of equals yet again. We urge anyone with information to contact the PSNI.”