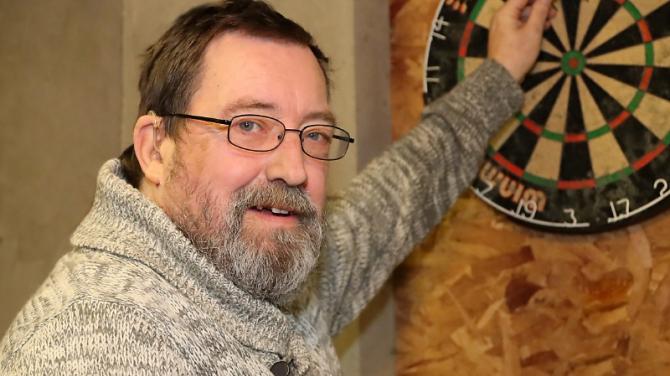 He’s certainly taken the proverb to heart over the years.

Affable Davy is best known locally for his connections to the darting fraternity but he is also no mean piper with many years of playing at the highest level.

Guardian editor, Des Blackadder spoke to Davy last week about the two pastimes which have played such a large part in his life.

THEY say that musical ability runs in families and Davy Wilson seems to be living proof of that claim.

Born in Berlin during the dark days of the Cold War, Davy was an army baby.

“My father Andy was serving in Berlin with the Royal Ulster Rifles in 1953 when I popped along,” he says. “At that time they were one of the infantry battalions stationed in the ‘British Sector’ of the city which was then divided up between the so-called controlling powers - the U.S., France and Soviet Russia being the others.

“I suppose I got my love of the pipes and piping from him because he was the RUR’s Pipe Major for many years eventually earning the BEM. He’d been in Korea and all the other old postings which were dotted across what was then the British Empire ”

When his father left the army, the family returned to live in prefabs in Belfast where he first attended Taughmonagh Primary. From there he progressed to Orangefield Secondary.

“When I left school we were living in Ballyhackamore in the East of the city. I tried being a mechanic for a while but it soon became apparent it wasn’t for me so I had a go at selling furniture.

“When that wasn’t cutting it I joined the army as a boy soldier at the tender age of 16 and a half! Up to St. Patrick Barracks I went and thus began my long association with the town,” recalls Davy.

“In those days it was a matter of going through the junior platoon before you were sent off to your battalion. My first posting was to Watchett in England. After that it was 22 years which I thoroughly enjoyed.

“While I was primarily an infantry soldier at the start I did take up the pipes and was very lucky to be part of one of the most popular military bands in the world.

“Things went full circle and one of the best postings in the army at that time took me back to Berlin. The Cold War was still going - check point charlie and all that stuff.

“We were pretty much a token garrison because Berlin was well inside the Russian sector and if a war had broken out they could have swamped us with huge numbers in a matter of hours.

“We were there to be seen and the Royal Irish Rangers always got great support behind them when they performed whether it was on ceremonials, joint military parades or the diplomatic engagements.”

And on their time off, the musicians could enhance their army pay with a gig or two in Berlin’s bierkellers.

“The Rangers had their own traditional band, the Blarney Boys, and they would go through all the popular Irish folk tunes at the official functions and at the mess partys.

“But a lot of other boys made a shilling or two in an ‘unofficial capacity’” winks Davy. “The Germans absolutely loved pipe band music especially. They couldn’t get enough of it.”

Eventually Davy rose through the various ranks to follow in his father’s footsteps in the role of Pipe Major of the 2nd Battalion.

“The music was a huge thing,” he says. “I can hardly remember how many really top class courses of instruction I was able to get under my belt. We were taught by some of the best pipers in the world about all aspects of the music from playing techniques to arrangements - even how to breathe to best effect when performing.”

And a major highlight of his piping career came when he was selected to be the Queen Mother’s personal piper for three weeks.

“Her full time piper had been taken ill so I was transferred in and each day I had to play for 15 minutes outside her window!”

By the early 1990s Davy was back in Ballymena and for a very good reason!

“I met my wife Martha (Workman) on a KAPE (keep the army in the public eye) tour in 1973. We first met at a dance up in St. Patrick’s Barracks. Everything went according to plan and we got married on December 21 1974 - only for the army to post me to Cyprus for six months just seven days later!

“I must have been doing something right though because we’re still together 45 years later.”

In 1992 Davy completed his service and the couple settled in Ballymena where he continued to take an interest in civilian pipe bands - and re-developed an interest in a ‘wee hobby’ which he’d first tried his hand at way back in the early 70s.

“I got into playing darts totally out of the blue,” recalls Davy. “One night in 1973 I was on leave and was asked to fill in on a team down in the Raglan. I think it was one of the wife’s relatives who asked me to make up the numbers.

“ I enjoyed a few games with friends in the army subsequently but to be honest it was just the very odd time.”

Having left the armed forces, Davy caught the darts bug and he’s been dealing with it ever since!

“I’ve played for Horse & Jockey, The Raglan (“sadly long gone”), The Ladysmith, The Coach and I’m now a member out at The Thatch in Broughshane which is just up the street from me.

“I have met some great friends through the game and when you’re a darts player or team you’ll always be made welcome by your opponents.

“Of course there is rivalry but no matter where you go in this often divided country you can say that the people who play the game have only one religion and that is darts.”

Davy says that conversations with other darts enthusiasts who have been involved in the lcoal game down through the years have revealed that at one time in the 1970s as many as 400 people would have been playing in the local league on a Friday night.

“The League had teams from all over the area. You had the town teams based in pubs and clubs and then there were pubs like the Lug O’ The Tub in Clough, The Greenhills in Cargin, The Halfway House and the Sheddings never mind the village teams.

“Back in those days it wasn’t a case of wall to wall giant screens in pubs showing all the big sporting events. Darts was essentially a matter of entertainment for many men and women. It was a great way to meet up with their friends and enjoy a night out at different venues.

“And there was always a good supper at the end of it,” laughs Davy.

So how did he become League secretary in the first place?

“I’ll put that down to my good friend Artie McAuley who could sell snow to Eskimos,” he says. “Artie was giving up the secretary post and he somehow convinced me that I was ideal for the post. Here I am today still doing the job.

“It’s not easy keeping everyone happy but you have to do the diplomatic role and at the end of the day things work out for the best.

“I’m still enthusiastic about darts and it is great to see more and more young men and women taking it up. Josh Rock is a real talent for example and he will be playing in his first international very soon.

“It’s still a great social thing and a lot of people just enjoy it for that reason alone,” says Davy. “But the best players have the mental edge.

“Another great current player is Jeffrey Matthews who is setting up a darts academy for young players which will hopefully be up and running for the summer.

“If you were to ask the real Ballymena darts veterans they would give you legendary names like Davy Rock, Norman Gilmour, Leslie ‘The Hawk’ Loughlin, Geordie McDowell and Jack O’Boyle.

“They would have been playing at the time when the League moved from the ‘double’ to the ‘treble’ board. Ballymena and Harryville District were one of the last leagues to stick with the old double board. I believe that the Glens League were the very last to use the double board.”

At 66, Davy has a lifetime of anecdotes to tell about darts but he reckons that local players are most proud of how a humble game has helped so many local charities down through the years.

“Darts players love a good tournament so when someone is having a charity effort there is always a great turnout.

“It would probably be surprising to total up just how much cash has been raised for good causes by the darts fraternity in this area down through the years,” he says.

And if darts is now well and truly in Davy’s bloodstream, what of his passion for the pipes?

“You never lose that,” he contends. “I still dabble a bit but not nearly as much as I used to. You could say the trick about piping is exactly the same for darts - if you practice enough you get better. If you let your practice sessions slip then the result is inevitable.

“If anyone wants to stay on top of their game - no matter what it is - they have to put in the hours at practice.”