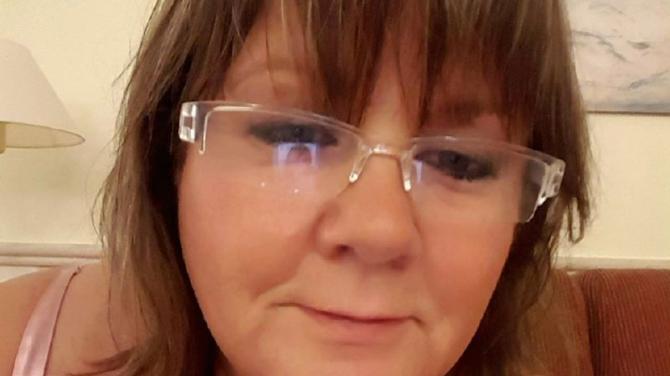 ORIGINALLY from Ballymena and probably one of the last batch of Cambridge House girls to wear the famous green beret, this week’s Top 10 volunteer is Lorraine Hughes.

She lives in Portglenone with husband Alan Hughes, who joined the business about six years ago after many years as a washing machine repair man (Washfix)

“Everyone in Ballymena seems to know him from those days!” she says.

Lorraine has two children - a boy of 26 and a girl aged 24, who ‘live in Belfast and come home once in a while to raid the larder and drink my wine’!

She lists her hobbies as vino and as many holidays as possible.

No.10 Baggy Trousers - Madness. Oh what fun we had but did it really turn out bad?

Madness always got you on your feet at Leighinmohr. Everyone dancing on the spot. You could have fitted 500 people on the dance floor as there was no sideways motion, just the up and down.

He's still about, that Suggs. 59 he is now. John loved Madness, but for extra drama he used to take his glasses off and throw them randomly into the crowd to loud cheers. Then he couldn't see anything for the rest of the night. He moved on to contacts soon after that. His mother was fed up buying him new pairs of glasses.

No. 9. I don't need no satisfaction. Rolling Stones. We played it over and over again, in my dark brown bedroom with the white circles, made from bowls placed and painted around. Funky or what?

The white centre gave a little light, unlike Maurice , who painted his room jet black and then had to feel his way along the floor to get out in the morning.

One day the speaker fell off the wall and chopped the right ear off my yucca plant. Van Gogh moment. I had a stacked stereo music stystem from Camerons, in those days it was the size of a sideboard, with the turntable on top. Cameron’s coffee shop of course was the place to go after school, 6 abandoned green berets, dark brown tables and one iced bun between you if you were lucky. So yeah, I don't need no satisfaction.

No.8. Run, Gary Lightbody. I saw him once. He stood not three feet from me. Although I had this suspicion that he didn't actually notice me. Despite the jumping and yelling and singing very loudly.

They say you don't notice anyone outside your decade. To infinity and beyond, Gary, my dear.

No.7 The lights all went down in Massachusetts. Bee Gees. We used to call it, mass of two sets, in deference to yer main man's giant teeth. Maurice sewed halfway up a black tails suit in gold sequins, (but lost interest in the other half, despite Tilly adding a row or two) Such was their influence on we teenagers. You always need a Bee Gee. Which is handy enough as there's only one left.

No. 6 America Pie. Don Mclean. Drove my Chevy to the levee but the levee was dry. What did that even mean anyway? A song that went on a bit. A classic though. Don’t mention Madonna. A song you had to sing along with. Wasn't much of a looker, that Don McClean. Did you write the book of love. Doubt it Don, doubt it.

No.5. Heart of Glass- Blondie. We thought we were all Debbie Harry at Tullyglass (even Maurice). Well, we thought this but, minus the perfect lips and the hair and well, the body. We had the moves though. I think.

Denise Connolly always looked great. She had a hair crimper and everything. Once I had a love and it was a gas, she said. Nitrous oxide maybe.

Not sure that Southbound Train had a go at this classic. Moves would have been too much for Eric. Maybe they did, and I was just home that night watching the Young Ones or The Hitman and Her or The Exorcist on a dodgy Betamax from Kenny McDonald’s.

Everybody is Kung fu fighting. Everyone was always chopping and sticking their legs in the air. Made for an interesting dance floor at the Toll bar, mind you.

No. 3. Bye bye Baby. Bay City Rollers. Eric was the best, but Woody was 2nd. The guy on the drums was always last. His mouth was too big. 3/4 trousers with tartan and gatsby jumpers. Thursday night Top of the Tops, waiting on the 3 minutes. Someone told me once they all danced in the front room when TOTP was on!

We never danced. My dad wouldn't have been up for it.

Fiona from school stood in front of a poster and got someone to take a picture and we all were 100% convinced she was there, despite the skin colour differences, the shadows and well, the size of her head.

No. 2. Hotel California. Eagles. On a dark desert highway, cool wind in my hair. Everyone knows all the words. We had it good in our day. Now they only have Kanye and Justin Bieber and eejits like that. We had the best.

Half of them are dead now, probably. I liked Don Henley with the big afro hair. He's all tidy now, sometimes I think it's not the same person, until he sings. He should wear a wig. You can get them on Ebay.

No. 1. Pink Floyd. Comfortably Numb. You're either a David Gilmour or a Roger Waters man. I'm a David. Comfortably Numb is the pinnacle, the greatest, the max. It'll never be bettered. "Another brick in the Wall" movie at Larne picture house. What was that all about anyway. I was no wiser coming out than going in.