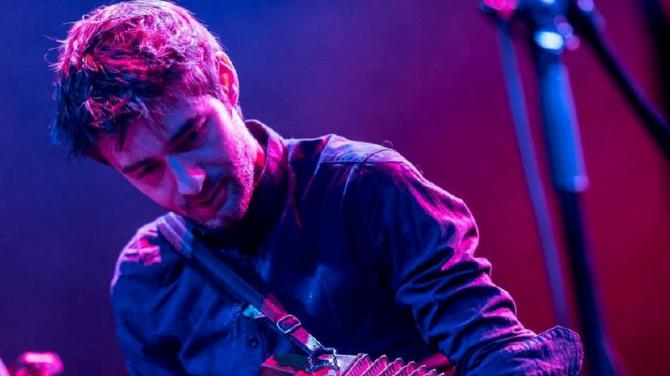 FROM headlining Glastonbury with Ed Sheeran in 2017 and working with renowned artists such as Johnny McDaid from Snow Patrol and Bangor singer Foy Vance, local band Beoga are tuning up for an exciting new year, having recently been signed to Columbia Records.

Portglenone man Seán Óg Graham, who is accomplished in a variety of instruments, and his friend Eamon Murray, who plays the bodhrán and drums, grew up playing together in The Crosskeys Inn.

From the age of around 14, they dreamed about touring the world in a band and that became a reality when a few years later, they teamed up with pianist Liam Bradley and accordion player Damian McKee - and so Beoga was formed.

Seán Óg went on to complete a degree in Irish Music at the Irish World Academy of Music and Dance, at the University of Limerick, where he met his wife Niamh Dunne, who is herself a fully fledged member of the band, playing fiddle and singing.

Beoga is the Irish word for vivid or lively, and it certainly describes the band's energetic and infectious style of playing.

Indeed, this is what prompted global superstar Ed Sheeran to invite the band to perform on his 'Divide' album and help to co-write his smash hit ‘Galway Girl’.

The Ballynena Guardian caught up with former St Louis Grammar School pupil Seán Óg, just before he jetted off to Mexico for three weeks.

Seán lives in Portglenone with his wife Niamh and their dog, Trigger.

Speaking about his early involvement in music, he said: "My parents didn’t play but they sent all of us to music and dancing for years and drove us to lessons and events every night of the week, I owe them a lot for that. They had a keen interest and were very supportive.

"I was sent to the local Comhaltas Ceoltóirí Éireann (CCE) branch in Portglenone when I was around 8.

"I started tin whistle classes with the late John Kennedy first, then progressed onto the button accordion with Tommy Doherty.

"My parents then started taking us to The Crosskey’s Inn every week for sessions and I also joined the Comahltas branch there too.

"That place had a huge effect on me, there were great musicians there of all ages and they really helped cultivate my interest growing up. I still go there when I can.

"As part of the Crosskeys Comhaltas we won many All-Irelands. We had a great gang at the time along with dedicated parents that were also passionate about the music.

"Going to the Fleadhs was as much about socialising with other kids in music as it was competing. We got up to all sorts of 'divilment' that I won’t get into here!

"I started on the tin whistle, moved to button accordion then started to teach myself guitar when I was 15. I quickly became obsessed with the guitar.

"It's such a versatile instrument and one that you can literally play or learn any style of music on.

"From playing the guitar I was able to give a few other stringed instruments a go - bouzouki, tenor guitar, bass, electric guitar.

"It's not a big stretch to adapt the same skills on guitar over to other instruments, and its nice to have different colours available, especially when writing.

"Sometimes I write on the piano - because I’m not great at playing piano, you’re forced to think differently and that can work in your favour.

"In terms of my influences, for the accordion it would be Mairtin O'Connor or Dermot Byrne. For the guitar, its harder to narrow it down, but three that stand out are Arty Mc Glynn, Steve Cooney and John Doyle. My own style is probably some hybrid mix of those three.

"I am involved with ‘Ulaid’ with John Mc Sherry and Donal O’Connor, and Scottish group ‘Fiddlers Bid’.

"As a guitar player I regularly work with a lot of other traditional bands including Lunasa, Flook, Buille, and the Mairtin O’Connor Band".

Beoga was formed while Seán was a pupil at St Louis Grammar School.

He continued: "At St Louis, I was involved with the Traditional Group the whole time I was there.

"Frank Cassidy directed it and was always very encouraging. We competed in ‘Slogadh’ competitions (now called ‘Siansa’) and had great craic travelling around to the different competitions.

"Beoga was formed around this time and the teachers were very understanding about me missing days here and there to play gigs.

"I used to go to the States for these long weekends and be catching up on school work on the plane home.

"Whilst at St Louis I never actually studied music as an option. I didn’t have a classical background and for some reason never thought it would be a viable career option!

"Whilst studying for my A levels, I started to become really obsessed with music and decided that was it - I couldn’t even think about doing anything else.

"Up until that point I was looking at careers in IT. I heard about a new course in University of Limerick offering a degree in Irish music, that didn’t require A level music, you just had to go for an interview and perform.

"I got in anyway and I met Niamh there. We were in the same class and became big pals and she ended up joining the band.

"She’s an amazing fiddle player and singer and I’m lucky to have found her!"

Beoga have been together for around 18 years and they have been afforded the opportunity to travel the world doing what they love.

Seán said: "We’ve toured a lot around Europe and North America but have also been lucky to tour in more exotic places like Japan, Australia and Russia.

"We’re travelling a bit less now, thankfully, but at one stage I was definitely seeing more of the band than my own family".

One of the biggest audiences the band have performed to was a 100,000 strong crowd at the Glastonbury festival in 2017 alongside Ed Sheeran.

Sheeran, whose grandparents hail from the Emerald Isle, is well-known for his love of Irish traditional and folk music, even recording a version of The Parting Glass.

He has said that one of his earliest musical memories is listening to the Irish Heartbeat album by Van Morrison and The Chieftains and he is also a fan of The Bothy Band and Planxty.

Close friend of the band, Foy Vance, shares the same record label as Sheeran and had been supporting him on tour.

They had listened to a few of Beoga's tunes on the road, and Ed reached out to the band to help with his album.

Seán explained: "We went to over to his house in Suffolk for a couple of days. It was all very relaxed, he made everyone feel completely at ease.

"The weather was amazing so we were outside in the garden a lot. We played on four tracks and two made it to the album so we’re delighted.

"One of them, ‘Galway Girl’, came about just jamming in the garden outside the studio. He was completely sound, we stayed in his house and had a few beers and even played a game of football at one stage.

"Working with Ed has presented a lot of new opportunities to play and write with other artists.

"Our friend Foy Vance was the guy responsible for introducing us to Ed. We’ve written a good few songs with Foy now and will hopefully keep creating more with him, he’s an amazing singer and an even more amazing songwriter and is finally being recognised as such.

"We’ve also worked with Johnny McDaid on the songwriting and production side of things, although he’s been crazy busy since Snow Patrol started touring again.

"Just recently we’ve been writing a bit with Cormac Neeson from ‘The Answer’. The collaborations are really exciting to me, you just don’t know whats going to come out of a writing session but that buzz of finishing the day with a song is a real high".

He encourages all age groups to get involved and give it a try, commenting: "If I had any advice, it would be to not to get too worked up about competitions and instead focus more on the social side of the music.

"While competitions can be good to focus on something, it can put a lot of unnecessary pressure on kids".

He has been recording for about 14 years and recently moved into his current space about five years ago.

He said: " I regularly engineer and produce other artists here, so that keeps me busy outside of the bands schedule".

Beoga will be releasing a new album in the Spring.

It will include singles released over the last few months along with some new songs and instrumentals that the group have been working on over the last year.