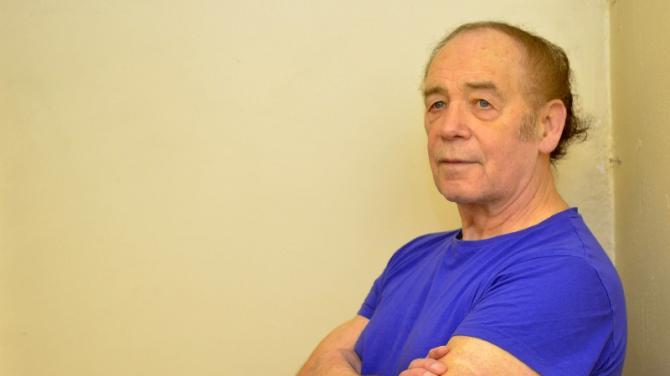 AS a highly trained martial artist with a lifetime of experience, it's no surprise that Dan Redmond doesn't pull any punches in his new autobiography.

But the book, which will be published later this year, also takes the reader on a journey of redemption through one man's utter dedication to the Karate style known as Wado-Ryu .. the way of peace.

Guardian Editor Des Blackadder sat down with the Ballymena 7th Dan Black Belt to discuss the new book and how his personal philosophy has changed down through the years.

GROWING up in what was once the rural outskirts of Ballymena, Dan Redmond came into the world when rationing was still a fact of life and - to put it bluntly - times were hard.

The Sunday stroll out to 'The Pennybridge' was a regular and much enjoyed activity for generations of Ballymena families but for Dan the country life had a major disadvantage.

With few local children to interact with on a social level going to primary school proved a mental and physical ordeal. It was not long before the shy and physically ‘delicate’ Redmond fell prey to bullies.

It was an unsophisticated age with the idea of counselling for children a concept only developed many decades into the future.

Looking back, Danny traces his propensity for violence and trouble-making right back to his earliest school days.

“Basically it was an environment where many issues were solved with violent behaviour - whether verbal or physical. Being slapped around by a teacher was commonplace and I always got the impression that the poorer your background the more you were treated with contempt.

“I was picked on at school and that had a long term effect on my attitude which took a long time to change.”

Despite a lifetime love of art, Dan admits he was not that interested in other subjects and at the age of 14 he, like many thousands of others, took his first steps into the world of work.

At around the same time, he recalls his first serious introduction to combat training.

“My Uncle William came home from England and it didn’t take him long to work out that I needed to learn a few fighting skills.

“He taught me boxing drills and a bit of wrestling. I remember he hung a punch bag up on the branch of a tree for me. Believe me that training came in handy!” he recalls.

Just like many of his contemporaries, Dan got his first job on the floor of the Braidwater Mill, easily the biggest employer in the area at the time.

“I was still a child to be honest. The older girls used to mother me,” he laughs.

That was until he ended up in an all-out scrap with the boyfriend of one girl.

“He and I fought it out and even though I was younger the anger just took over and I ended up giving him a beating,” says Dan.

The signposts of life had been set for Dan Redmond even in his early teenage years and the road took him to some dark places which few who live in the mainstream of society can even contemplate.

By the age of 18, Dan had decided to opt for a new career in England as a male nurse in a mental health facility.

“I thought I would be able to cope with the role but to be honest I saw too much brutality against those poor people. It would shock people nowadays but it was commonplace then.

“After a year I’d had enough. I was ashamed that I’d done nothing about what I’d seen and I just needed out for my own sanity as much as anything else.”

His next job took him to the lowest rung of the ladder in the building trade - the site ‘tea boy’.

“Yeah, that meant general dogsbody. Running for papers, snacks and of course making the tea!”

But within a short time, Dan realised that he had another duty to perform.

“A guy came up to me and told me I would be boxing ‘for the site’ on the coming Friday night. The idea was that each site would put up their teaboy for a scrap and bets would be laid and some big money changed hands.

“On the road where I was working there were six or seven sites going at once so it was regular event.”

However, this was not exactly the world of carefully controlled amateur boxing.

“The ring was a circle in the canteen and the gloves were basically bricklayer’s mitts. There was no referee and the fight lasted until someone chucked in the towel. I got a hammering in my first bout but I got better. It also meant I got extra cash - sometimes I could earn more from the fight than I could in wages,” he says.

Despite the bravado, Dan admits that he was ‘still a bit of a softie’ and bouts of homesickness eventually brought him back to Ballymena.

“Bear in mind there were no phones then. Letters took about two weeks to go back and forth and you felt very much cut off. I missed my mother greatly so I decided to come back to Ballymena,” he says.

However, it was a transformed and troubled man who began walking the streets of the town.

“I was looking for fights,” he admits, candidly. “You can dress it up whatever way you want but the truth is I was on the look-out for people who had given me a hard time in the past. I wanted to fight and there were plenty who were willing to oblige in Ballymena in those days.

“I had made my mind up to test them out - it was a very deliberate thing on my part. It was me talking with my fists and feet saying ‘I’ll show you boys now’.”

Dan sighs and looks at his fists: “I battled with many of the town’s hardened street fighters.

“I had one feud with members of a local family which lasted for years. I’m not proud to admit this but I used everything that came to hand and so did they. It was a world where survival was all that counted and where your reputation was only as good as your last scrap. I told myself that they would do the same to me so I just ploughed on ahead. The only thing that counted was winning.”

On one occasion Dan found himself sitting in a cafe when he was confronted by a gang who made it quite plain he was in for a severe beating.

“I’d put some of them in hospital and they’d put me in hospital too over the years so I knew it wasn’t an idle threat.

“I got a hold of the pepper pot, unscrewed the lid and threw the contents into one guy’s eyes before making my escape through a back kitchen.”

The fights and feuding were to continue for some time and Dan felt no desire to get off the treadmill of trouble he’d chosen for himself.

Then, on a visit to England, he had his first encounter with the discipline which would eventually change his life.

“I was having a cup of tea in some cafe when I heard all this noise coming down from the floor above. I asked the guy behind the counter what it was and he told me it was karate/kung fu class.

“In those days before Bruce Lee and the hit movies most people had just heard of the Karate ‘chop’ and there were very few classes going on anywhere in mainland Britain, never mind in Northern Ireland.

“I trained with those people for a few weeks and when I got home I started to search for clubs. I found one in Belfast and one in Dublin. I saved up every penny and about once a month I’d go back to England to train with the club there.”

But before anyone gets the wrong idea, this was not a ‘road to Damascus’ conversion.

“It was just another way to hone the fighting skills,” says Dan. “For me it was just another technique to bring to the battle. I was still a long way away from truly understanding what the martial arts are truly about.”

Not surprisingly, Dan treated the more esoteric elements of Karate with utter contempt.

The ‘kata’ - a series of technical movements performed alone with the aim of attaining perfection of movement and power - was ‘just a dance’ to him.

“It took me years to learn the truth. All I wanted to do was prove how good I was on the dojo floor during Kumite - which is essentially a form of controlled sparring.”

Except Dan’s idea of sparring was less to do with control and more to do with rage and ruthlessness.

“I got to a level where I was picked for the first ever Northern Ireland Karate team. But I let them and myself down far too many times through my lack of control on the mat. I was also in three all-Ireland individual finals and lost them all because of disqualification. I simply took my streetfighting attitude into competition and that cost me dearly.”

Unlike today when it is possible to progress through the ranks in Karate in a structured, systematic fashion, it took Dan 12 years just to be accepted for his first Black Belt grading.

“I failed it twice and got it third time so I’d been doing Karate for about 13 or 14 years before I actually got the belt. But I didn’t worry that much about the colour of what was round my waist.

“I was still bound up in the fighting ethic after all that time.”

But slowly the reality of what hehad done in his earlier life began to dawn and Dan knew it was time to change.

“I have no rose tinted glasses about my past,” he says. “I’m well aware of how I was viewed by most members of society but when I was a fighting man I could not have cared less what they thought.

“It was only when I started to take a long hard look at myself that I took the first steps away from that violent past.

“It took a long time for the light bulb to come on but it was Karate that changed every aspect of my life.

“I can look back on 40 years involvement in a discipline which has taken me all over the world and given me so much satisfaction.

“Did you ever see ‘The Karate Kid’?” he asks. “Well in my early days I was definitely the ‘bad’ instructor but now I hope I’ve matured enough to be on the Mr. Miyagi scale of things!”

Dan still trains every day whether it be in Tai Chi or Karate. Meditation is also a vital part of his life.

“l now firmly believe that violence is not the way to solve problems,” he says.

What really makes him proud now is seeing the young people who attend his Chujo Karate School classes gain in confidence and character through the martial art which he loves so much.

Looking back, the question which has to be asked is ‘who was the bravest, toughest fighter you ever came up against?’

Dan does not hesitate: “If we are talking true courage then I have to say it was my wife Maureen who passed away on December 19, 2018. She had suffered from Parkinson’s but throughout it all she kept smiling, looking after me and the family. That’s the real meaning of courage in my book,” he says.