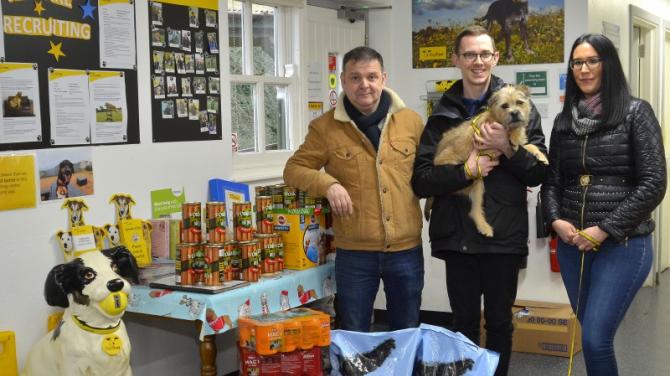 THE proceeds from a sell-out book chronicling the town's past and present licensed premises has benefited a local animal charity.

The book entitled 'From Harryville Bridge to the Chapel;A Ballymena Pub Crawl' was written and produced by regulars in Charlie's bar, Ballymena.

A total of £150 was raised from the sale of the book which was sold only through Charlie's Bar and Diamonds Newsagents, both on Broughshane Street.

On Wednesday of last week bar owner Charlie Havelin visited Ballymena’s Dog’s Trust on Teeshan Road to deliver hundreds of cans of meat bought with the cash which was raised in December.

According to the book back in the seventies there were 96 bars in Ballymena and “you couldn't walk from Harryville Bridge to the Chapel at the top of the town without walking past one”.

Ballymena also had its own whisky, McAllister's Whisky distilled by the owners of the Tullyglass House Hotel at their Galgorm Road site. There was also a local bottling factory, Murphy's bottlers sited at Railway Street.

With a limited print run the book, which quickly sold out, proved to be a popular Christmas gift purchase.

It included 60 licensed premises in Ballymena town, past and present and was only available in exchange for free donations by people visiting either Charlie’s Bar or Diamonds Newsagents.