Hate crime consulation to be held in Ballymena 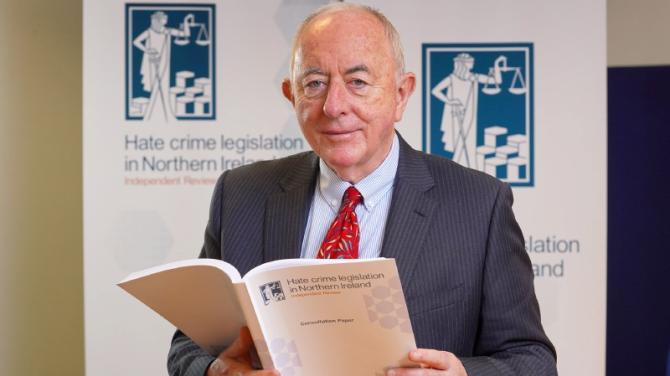 Ballymena people are being asked to play their part in a major consulation into ‘hate crime’ issues.

Judge Desmond Marrinan who is leading an independent review of Hate Crime Legislation in Northern Ireland has published a Consultation Paper and is inviting the public to share their views on the work.

The local consultation event will take place in Ballymena on Wednesday, February 5 at 7pm in The Braid Centre in the heart of the town.

The Department of Justice sponsored review was established in June last year to examine a wide range of matter including developing an agreed definition of Hate Crime; determining if the current enhanced sentencing approach in Northern Ireland is appropriate; and reviewing and if necessary expanding the current protected groups of race, religion, sexual orientation and disability.

“Along with my team we have met over 70 organisations and individuals from across Northern Ireland.

“Their contributions, including some very personal experiences, have been enormously helpful and informative.

“I thank them for their courage and commitment in confidentially sharing their views with us.

“I would encourage everyone to make their view known by engaging with the Public Consultation and playing their part in helping us find better ways of dealing with Hate Crime in Northern Ireland.”

The review team is also inviting views on the current framework for incitement offences; the identification of any gaps in our current legal system; and the potential for alternative or mutually supportive restorative justice approaches for dealing with hate motivated offending.

The Public Consultation will remain open until 31 March.

Full detail of the Public Consultation, Review Terms of Reference and the programme of outreach events are available online at www.hatecrimereviewni.org or by telephoning 028 9026 1395

Desmond Marrinan was called to the Bar of Northern Ireland in 1972 and later to the Irish Bar.

He specialised in EC law, criminal law and professional negligence litigation until appointment as a County Court judge in 2003.

He lectured in public law at the Queen’s University of Belfast from 1971-1978 and latterly was an external examiner for the Institute of Professional Legal Studies at Queens.

He was formerly the Vice-Chair of the Law Reform Advisory Committee.

He served as a County Court judge until 2018 dealing mostly with criminal trials in the Crown Court.

He was the Recorder of Londonderry from 2008-2011 and continues to sit as a Deputy County Court judge and as a Parole Commissioner.