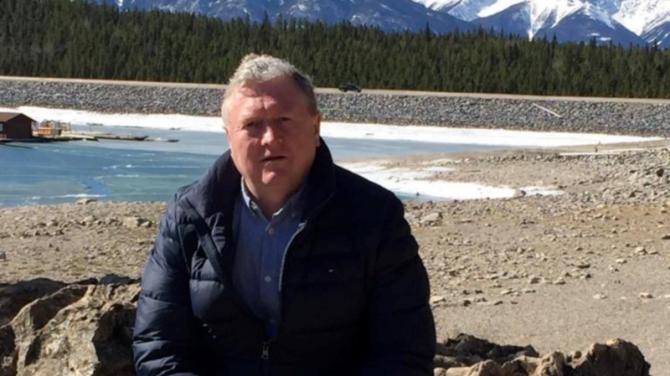 Vincent Rainey from Dunloy is well known in the local area for all things property, finance and quizzing related!

He is in the Guardian hot seat this week, speaking to us about his love of music and choosing his top ten tracks - not an easy task by any means.

Vincent enjoys a busy family life AND has five children and five grandchildren.

He is a finance and property expert, and in his spare time helps out as a quiz master, which keeps him sharp!

However music has always been a big part of his life, and he has had an interest in it since he was only a boy.

“Music is a passion and something that has followed me since childhood,” explained Vincent.

He confesses that his top 10 favourite songs are constantly changing, so when revealing his list, he decided to focus on a top 10 that brings back the strongest memories for him throughout his life.

At number one is the Beach Boys with ‘God Only knows’.

“This was released in 1966 off the incredible Pet Sounds album.

“Although I didn’t discover it until my teens, this is an enduring song of beauty.”

Number two on his list is ‘The Long and Winding Road’ from The Beatles.

He said: “It’s impossible not to have a Beatles track in here. This is just before my time but this song from the 1970 ‘Let it Be’ album is my pick from many contenders.

“This is my earliest memory from the 1968 pop classic.

“The remake of a ‘67 hit for Robert Knight sung by the wonderful Steve Ellis.”

The number four spot is reserved for ‘Bridge Over Troubled Water’.

“Coming up to its 50th anniversary, my constant favourite song of all time by Simon and Garfunkel (introduced to me by my mum) is Bridge Over Troubled Waters.”

“What top 10 couldn’t contain this amazing singer and composer who contributed to the success of Aretha, Marvin Gaye, Stevie Wonder and Al Green.”

“Probably in the mid 70’s my favourite group was Pink Floyd. It was during this period that I began to collect albums.

“Dark Side Of The Moon being my first Floyd purchase, however my pick is ‘Wish You Were Here’ off their ‘75 album of the same name.”

Seventh spot goes to The Eagles.

“Sticking my mid 70’s period (Teenage love) of music and my infatuation with The Eagles.

“I rather quickly acquired their early albums ‘Desperado On The Border One Of These Nights’, however my selection is ‘The Last Resort’ off their 5th studio album Hotel California.”

For eighth spot, Vincent stays with The Eagles.

“I’m still in my teenage years and sticking with the Eagles theme, although I’ve moved sideways to select an album I listened to nightly for a couple of years from Jackson Browne.

“It was his fourth album and I’ve picked the title track, which is the wonderful ‘The Pretender’.

As the list draws to a close, Vincent says: “Running out of room as I juggle with The Four Tops, The Jam, Steely Dan, Stevie, Wonder, Elvis Costello, Al Green, Spencer Davis, The Rolling Stones, George Harrison and OMD.

“But I have to stick with my memory theme and at number nine I’ve gone with ‘Supertramp’ which I overplayed at university.

“Mainly Crime Of The Century and Breakfast In America and Crisis What Crisis.

“My selection is from the latter album and I’ve gone for A Soap Box Opera, it’s orchestral feel just does it to me.”

For the last place on his top ten list, Vincent has included a track from the legendary Bruce Springsteen.

“I needed Bruce Springsteen in here.

“Although how do I pick just one track? Born To Run, The River Nebraska, Born In The USA, The Rising?

“Again sticking with nostalgia and being a romantic I’ve picked the 1984 ‘Dancing In The Dark’ because it was the year I married Catherine and she’s had to put up with my music ever since!”

It’s often hard to think of your favourite 10 tracks! Vincent admits these “are not necessarily my favourite ever songs as the list changes constantly, but they certainly contain my strongest and fondest memories from down through the years.