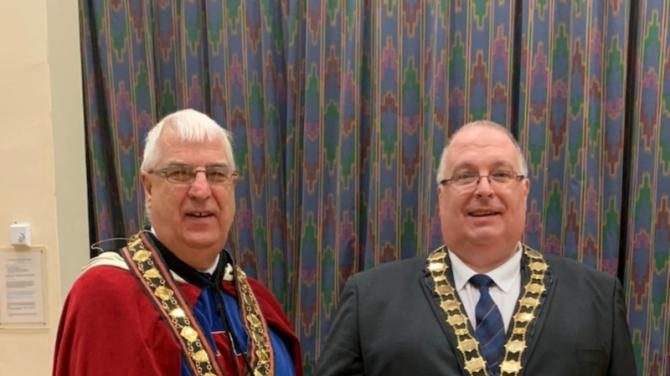 A Ballymena businessman has been appointed Assistant Sovereign Grand Master of the Royal Black Institution.

Harold McCloy, 50, dedicated his term of office to his late father, Harry, who died suddenly in October, having been a member of the Loyal Order for almost 65 years.

Sir Knight McCloy - who also holds positions at preceptory, district and county level within the Institution - was appointed to his new role at the half-yearly meeting of the Imperial Grand Council in Cookstown in December.

“I wish to dedicate my term of office as ASGM to my late father, Harry McCloy,” he said.

“My dad encouraged and supported me in my roles of office. If he had been alive today, this latest appointment would have made him very proud, but I know he is in his heavenly home looking down upon us.”

Sir Knight McCloy is managing director of his own business, Village Blinds, based in Ballymena. Founded 28 years ago, the firm employs around 35 members of staff, and supplies products across the UK and Ireland.

He joined the Institution in 1997 and is a member of Mount Horeb RBP 270, encamped at Cullybackey, having proudly serving as Worshipful Master for a two-year term. He is currently the preceptory’s Treasurer.

“This allowed me to grow my knowledge of all 22 preceptories within our District by attending elections and installations at each of them over this period of time,” he said.

He is the Grand Treasurer of Co Antrim Grand Black Chapter, and at Imperial level sits on the Admin and Finance Committee. He also represents the members from Togo and Ghana on Central Committee.

Sir Knight McCloy has been married to his wife, Alison, for almost 30 years, and they have three grown-up children – Phillip, 27, Judith, 23, and 20-year-old Christopher.

“To hold my various offices, I need a very understanding wife! I thank Alison for supporting me and encouraging me over the years. Without this support, I just couldn’t give my jobs my all,” he said.

“To have the honour of being appointed ASGM and to serve as one of three Assistants to our Sovereign Grand Master has been the highlight of my almost 30 years of membership,” said Sir Knight McCloy.

“I promise to serve this wonderful Institution to the best of my ability, and I look forward to traveling to new places and getting to know many more members within new regions.”

Sovereign Grand Master, Rev William Anderson, hailed the appointment of his new Assistant as a “great boost” for the Institution, adding: “I wish Harold God’s richest blessing as he takes up his new responsibilities and I look forward to working alongside him in the three years to come.

“I know he will bring hard work, energy and enthusiasm to his new role, and his appointment is just reward for the great commitment he has shown over the years to the ideals and ethos of our beloved Institution.”