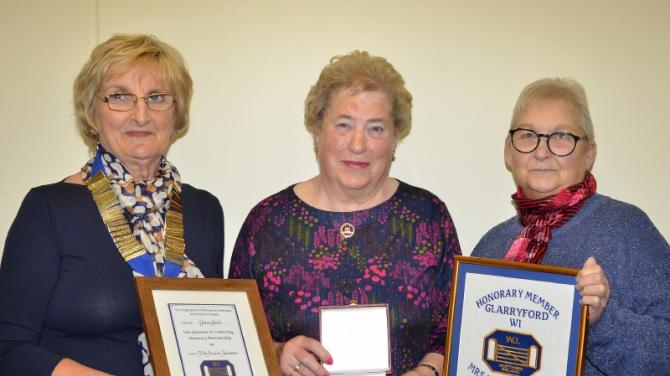 The talk, A Pill for Ever Ill, provided good advice with a smile about the speaker’s extensive experience as a local pharmacist and how to stay healthy throughout the winter months.

The Runciman Bowl is awarded to the Slemish Area WI whose members achieve the most points in WI arts, crafts and produce competitions at Ballymena Show.

The 2019 Show entries secured Glarryford WI this honour for the third year in succession and members who competed were photographed with their trophy.

Rhona Gillen was congratulated on her very special November birthday.

In December, the ladies of Glarryford WI donned their party gear for fun and games and enjoyed a delicious meal prepared and served by local caterer Jackie Johnston and her team. President Vera, Secretary Heather and committee members had decked the Farmers’ Hall in festive style.

The decorated Christmas cracker competition was won by Vera McBurney, 2nd Sandra Patton, 3rd Heather Alexander. Congratulations were extended to December Birthday Girl Jacqueline Matthews and all who celebrate a Birthday in the Christmas month.

Honorary member Annie Johnston kept everyone in good spirits as she spoke to an appreciative audience about her shock and surprise on receiving a letter from the Prime Minister’s office last spring, informing her that she had been included in the 2019 Queen’s Birthday Honours.

This was to reward decades of dedication to maintaining, teaching and sharing traditional craftwork skills.

The news had to be kept to herself until the public announcement on 6th June, the day of Glarryford WI’s summer outing.

What a coincidence and word had spread quickly because by the time she boarded the coach at 9am she was greeted with a huge cheer!

Annie then described the memorable day in October when the Lord Lieutenant of Co Antrim presented her with the British Empire Medal at Hillsborough Castle.

There is also another “big day” to look forward to in 2020. Annie has accepted an invitation from Her Majesty, Queen Elizabeth II to a garden party at Buckingham Palace.

This is also an honour for Glarryford WI where Annie has been an active member for 60 years.

The next meeting is on Thursday, January 9 at 8pm and new members are always welcome.