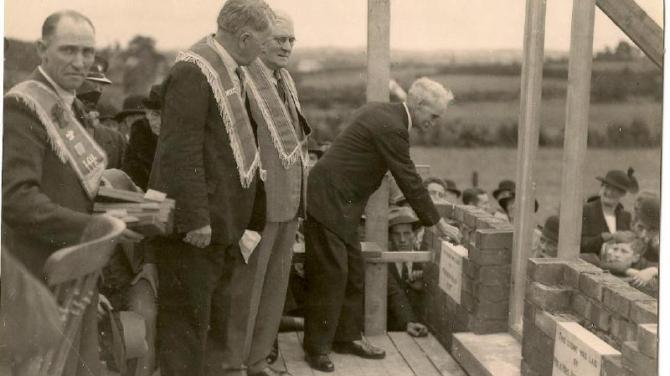 A GENTLEMAN sent us this picture of the laying of the foundation stone of the Ferniskey Orange Lodge in 1939 and is hoping our readers can help him find out some information about the people in it.

In 1864 Archibald Allen had a son called William Allen.

In 1870 Archibald Allen had another son called Matthew Allen.

John believes that this Matthew Allen is his grandfather’s brother, who it is believed died in the 1950's .

However, no death certificate or marriage certificate has been found and John is unsure of his occupation or where he lived.

John states that his father attended a funeral in Ireland in the 50s and he is questioning if this was Matthew Allen’s funeral.

Although John has limited details about Matthew Allen, he assumes he must have been a man of some status to be laying the stone in the lodge.

Hele, the archivist of the Orange Order, sent John a cutting from the Northern Whig dated September 1939 which showed that six stones were laid for the Ferniskey LOL 115.

The Ulster MP Hugh Minford was present and made a speech.

If any members of Ferniskey LOL or any of our readers can help John please get in touch.