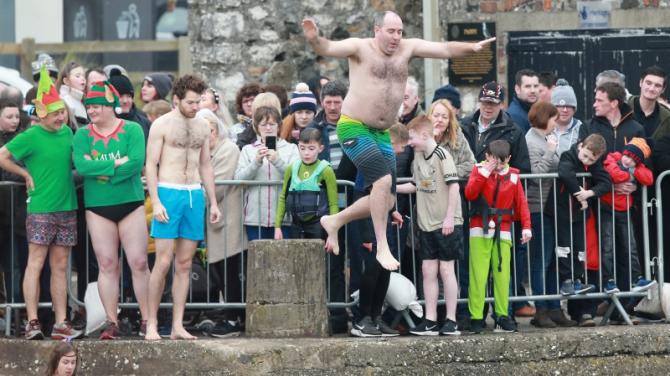 OVER 80 people took the plunge at the annual New Year's Day Swim in Carnlough in aid of the Ballymena branch of the Spina Bifida Association.

On what was a very mild New Year’s Day Geoff Bell, who started the event off on 1971, ushered the swimmers into the water at 12 noon.

Included with Geoff were several seasoned swimmers such as Bert Kernohan, on his 42nd, his Son Andrew, on his 21st, and Daughter Donna, on her 10th, as well as Darren Donnell, Hugo Carlin, Josh McCrory and Angela and Megan McClements to name a few. Two other swimmers making their yearly pilgrimage were Arthur Chatfield from Scotland and Alan Traynor from Donegal.

Several families also participated and among them were, the Eddie and Scott Gilmore, Simon and Chole Murphy, Darren and Curtis Donnell, Alister and Laurie Neeson, Anthony and Paul O’Rawe, Brian Lemon and Son Brian, Robert, Matthew, Sarah and Joy Bowman, Andrew and William Knox and David and Naomi Morrow.

With the favourable weather it was a great day for the number of new first-time swimmers and in particular the young people taking part along with the usual stalwarts.

With everyone back on terra firma and changed they made their way to the Bridge Inn to get fed and watered prior to the social festivities taking place.

Chairman, Billy McIlroy, said it was “very pleasing” to see so many swimmers including young people on the events 49th year.

Mementoes and certificates were presented by Mrs Sharon Smyth and Mrs Ann Ryan to the swimmers who had taken part on the day with all the swimmers being warmly applauded.

After the presentations the Chairman again paid tribute to those who sponsored the swimmers this year as they have done for many years in the past.

Last year the swim raised the magnificent sum of £5023 and this year again has got off to a brilliant start with £3012 being lifted on the day thanks to the generous sponsorship from the general public.

The social festivities got off to a good start with Bert Kernohan carrying out the duties of compere and the music being supplied by Two Star Country.

The Choir Challenge followed with the ladies out to regain their crown which they had lost last year. They went first conducted by Dana Kernohan setting a very high standard for the judge Billy McIlroy. The men followed and put on a wonderful performance under the leadership of Bert Kernohan.

In judging Billy said he had to apply the “Var” as used in football and on this the better harmonising by the ladies gave them the win by the slimmest of margins which was received with rapturous applause.

Next year will be the 50th anniversary of the event which will be a Major Milestone in it's history.

The Chairman thanked everyone who in any way assisted in helping to make the event the success that it was.

The organisers of the swim would like to thank Andrew McAlister and his team from Mid and East Antrim Council who installed safety barriers around the harbour and were responsible for the overall safety of everyone as well as Events Insurance Company in England who provided the Public Liability Insurance Cover required to allow the event to take place, Larne branch of the Saint John’s Ambulance and Carnlough Rowing Club for the use of their Clubhouse.

In addition they would like to thank Mr Paul McWilliams Proprietor of Galgorm Trophies who supplied the Swimmers Mementoes, Ballymena Business Equipment Larne Street Ballymena who supplied the certificates, Darren and Sabrina Donnell and Family for the Harbour collection which raised £324.20, Darren Donnell and Anne Ryan who organised the raffle, The Associations Mothers Committee and Friends who donated the prizes which raised £251.85, Spud Murphy and family who donated and organised, Nearest Coin to the Litre bottle of Smirnoff which raised the Sum of £117 inside ten minutes , Myrtle Taylor Treasurer and Sharon Smyth Committee Member for the registration of swimmers and completion of the certificates and Sharon who also organised the presentation of raffle prizes and James Henry and staff Broughshane Street Ballymena who provided the transport and chaperoned the swimmers from the Seven Towers Leisure Centre Ballymena to Carnlough

Anyone who was unable to attend the presentation in the Bridge Inn to receive their Certificate and Medal please contact Billy McIlroy on 07718809314.