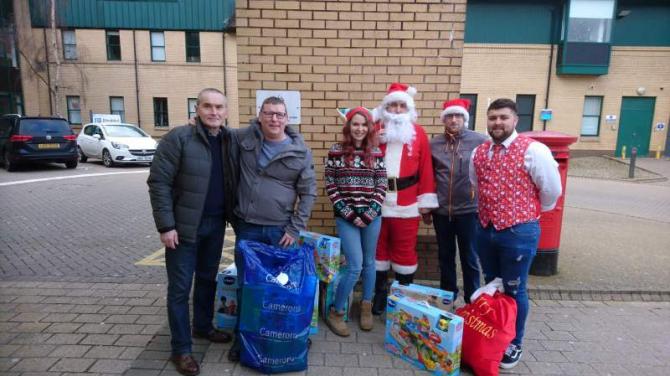 A bulging sack of toys was delivered by the group to the Children’s Ward at Antrim Area Hospital on Saturday with a smilar consignment handed in to the NI Children’s Hospice later the same day.

The toys were bought using a money gift handed to the former workers at the factory gates during the takeover negotiations by Sir William Wright.

Brian McAuley explains: "Just after we lost our jobs with Wrightbus, Sir William Wright came to the boys who were standing outside the factory and handed us an envelope.

“When we opened it up there was £500 in it. We also received £200 from the Harland and Wolff workers who came up to Ballymena to show their support plus we had been given £200 from other businesses, too many to mention individually.

“I was put in charge of the money but we wanted as many people as possible to have a say on how it should be distributed.

“We set up a WhatsApp site for all the workers who had stood outside the gate until the deal was done - there were about 16 of us. So I asked the 16 for suggestions on what to do with the money. I got nine proposals.

“ I then put the 9 proposals onto another site. Wrightbus survivors page, and asked the workforce to vote for one 1 to 9.

“The vote went in favour of buying toys for the children's ward, Antrim area hospital.

“ I had a meeting with the ward sister who is very pleased to hear what we were doing.

“We bought the toys at Camerons and when we delivered them on Saturday it was great to see the reaction.”