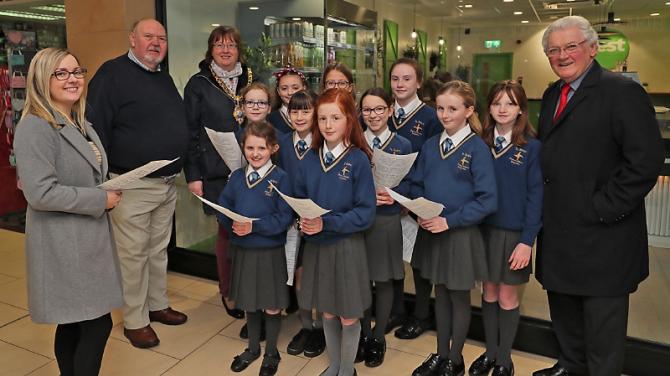 Rotarians from across Ireland have joined together in a bid to encourage people to remember their loved ones by posting a message on a number specially erected Christmas trees.

The Ballymena club’s initiative was launched last week in the Tower Centre.

It is thought that a staggering £250,000 will be raised for charities both locally and further a field by the All-Ireland effort.

Each tree encouraged shoppers to remember their loved ones with a message which is then be tied to the tree with a ribbon as a simple and poignant acknowledgment that they will be missed at this festive time of year.

Ballymena Rotary Club went further by erecting not one but four trees in the Tower Centre and encouraging shoppers to take a moment to remember a loved one while making a donation - funds raised will go to the NI Hospice and MacMillan Cancer.

Jim, Briggs, organiser and member of the Rotary Club of Ballymena says: “This scheme was launched by Mayor Cllr Morrow.

“During the launch, shoppers enjoyed beautiful and festive music from local school choirs.

“Each tree was manned from the 16th - 21st December from 10am-8pm daily by representatives from each charity along with members of the Rotary Club of Ballymena.

“We're very glad to have taken to taken part in Rotary's annual Tree of Remembrance Project, this is a wonderful event and very important to remind people to remember those who can't be with them at this festive time of year.

“It was also a great opportunity for us as Rotarians to get out into the community and spread festive joy.”