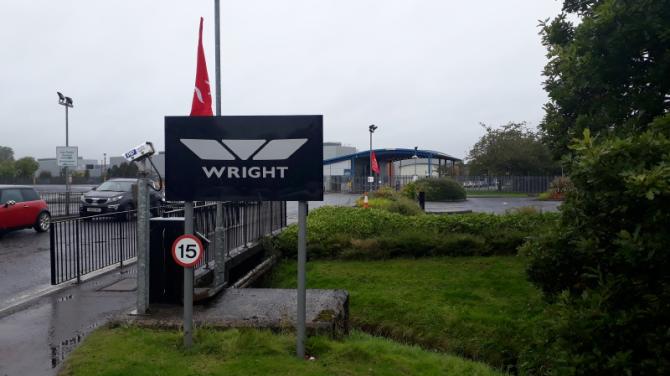 Former Wrightbus employees have been told that they could receive statutory redundancy payments before Christmas.

Their hopes were raised in a letter to MP Ian Paisley in which the Permanent Secretary for the Department of the Economy Mr Noel Lavery said that the treatment of former Wrightbus employees was the Departments "top priority."

He also told Mr Paisley that to date 935 claims for statutory redundancy have been received from former employees and the department continues to receive claims on a 'daily basis.'

However, some hope has been given that this money will be paid out before Christmas.

The Permanent Secretary told Mr Paisley that they will 'endeavour to make payments as soon as is practicable within the next couple of weeks.'

Currently, departmental staff are finalising the relevant information received from the insolvency practitioner regarding rates of pay and hours worked for each employee, and this is due to be completed next week.

However, the Department has confirmed that the 60 staff who were retained by the administrator are not entitled to any payments from the Statutory Guarantee Scheme.

It is unclear if workers who are now re-engaged with the company are entitled to redundancy.

The Department has also advised that those who were offered re-employment and did not accept would be viewed as having resigned, and therefore will not be entitled to redundancy pay from the Statutory Guarantee Scheme.

Mr Lavery did give assurance that "as soon as the information is received, all emloyees' applications will be processed as quickly as possible" as the Department "must adhere to strict policies on the release of public funds."