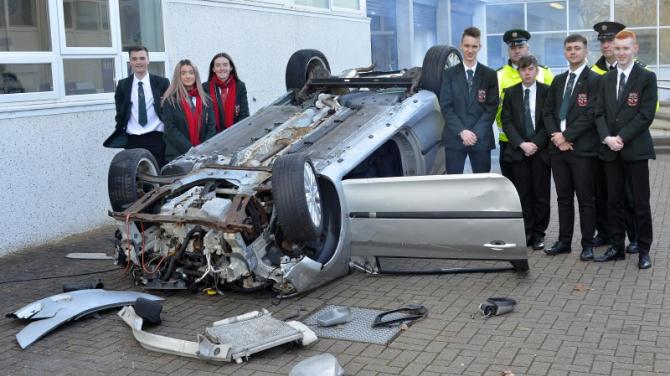 OVER 600 students from schools across Ballymena were served up a hard-hitting road safety message on Thursday of last week.

Hosted by Cambridge House Grammar School the award-winning Roadsafe Roadshow has been devised by the PSNI Roads Policing Unit.

Commenting on the Roadsafe Roadshow, which has been running since 2001, Constable Syd Henry, Road Policing Education Officer, said: “Recognising that many people aged 25 and under are killed or injured on our roads each year, the Roadshow aims to bring its message to those about to start out on what will, hopefully, be a long and safe motoring career.

“The show depicts graphically how a night out can end in tragedy and permanent disability. The story is told by a police officer, a paramedic, a fire officer, an Accident and Emergency consultant, and a young person who was paralysed following a horrific collision. The narrative is interspersed with music, video clips and television and cinema advertisements.”

The roadshow is sponsored by AXA Insurance and the event in Ballymena was supported by Mid and East Antrim PCSP.