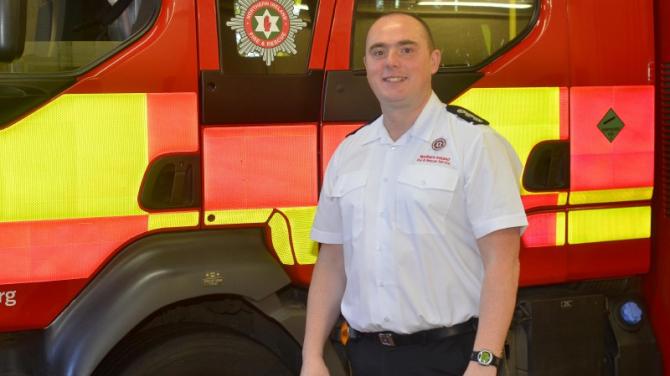 NORTHERN Ireland Fire and Rescue Service (NIFRS) is focusing on rural roads as part of this year's Road Safety Week which commenced on Monday (November 18) and runs until Sunday, November 24.

The campaign, in conjunction with the Department of Infrastructure, PSNI and Northern Ireland Ambulance Service, aims to highlight how the community can keep themselves and others safe on rural roads.

NIFRS has revealed that this year it responded to over 600 road traffic collisions and rescued over 440 people who were trapped in their vehicles.

Northern Area Command Assistant Group Commander, Alan Barr, said the theme of Road Safety Week was particularly relevant due to the large number of rural roads within the Ballymena and Antrim areas.

He said: “We attend road traffic collisions in the Ballymena area and we also cover further afield including Kilrea and Antrim as well as Glenarm, Carnlough, Cushendall and all the way down to Toomebridge.

“This year the focus is on rural roads and unfortunately that is where the most serious collisions do occur due to their topography and layout.

“In a rural situation, which covers a large area of Ballymena, more hazards exist such as telegraph poles, ditches, trees, stone walls and barbwire fences.

“Tight bends on rural roads also tend to be more slippery in winter due to leaf fall, more dirt and of course black ice.

“Coming into the winter months the evenings are getting darker earlier therefore more people are driving in the dark. Low sun in the evenings and mornings can also be an issue for drivers.”

Mr Barr explained that 16-24-year-olds continue to be over-represented in the statistics for those killed or seriously injured on the roads.

According to recent statistics there were 113 young people, aged between 16 and 24, killed or seriously injured on rural roads in 2018.

The NIFRS continue to target and prioritise their 'Your Choice' programme towards young people in geographical areas which continue to have high levels of road traffic collisions.

The scenario is based on a crash occurring on a rural road as a result of a tractor pulling out in front of a distracted young driver.

Mr Barr commented “We do welcome youth groups and schools to come and take up the 'Your Choice' programme. It is hard hitting and through the programme and the discussions which follow we want to highlight to young people how to make themselves and their friends safe on the roads.

“Our advice would be to wear a seat belt which will increase your chances of survival and never drink and drive.

“People also have to be very careful of distractions in the car, such as passengers in the front and back.

“When we learn to drive we are taught mirror, signal, manoeuvre but it is also important not to focus on mirrors too much. It is important to focus your attention on what is ahead rather than what is going on beside or behind you. It takes just seconds for the unexpected to happen when driving on rural roads from hitting a puddle, a badger or even a cow.

“It is also important to be aware of pedestrians or cyclists on rural roads particularly at night when they may not be easy to see.

“In addition, mobile phones can be a distraction, don't think they are just unique to young drivers, people of all ages use them.

“Even hands free can be a distraction for a couple of seconds while you are looking down to see who is calling. It is best to turn your phone off, put it on silent or on aeroplane mode.”

Mr Barr added that one of the biggest issues on rural roads is speeding.

He explained: “Speeding on a bendy road is never a good idea especially when you are not experienced at taking corners in a vehicle. When speeding stopping distances are drastically reduced and if you hit water your car is most likely going to aquaplane and you could end up in a ditch or a hedge.”

According to the NIFRS 90% of the people that have participated in the programme have said they will take fewer risks on the roads.

If any groups or schools in the area wish to find out more about the 'Your Choice' programme please email yourchoice@nifrs.org